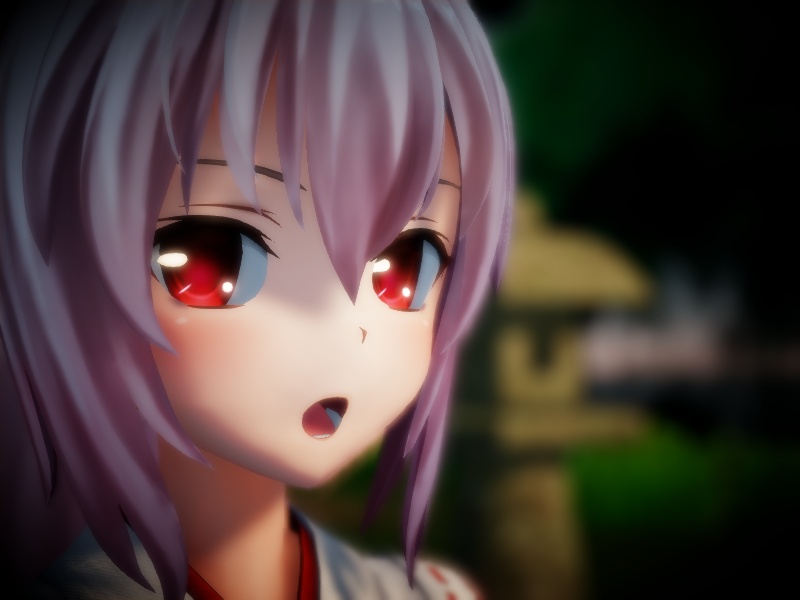 Create Animations WITHOUT Animating a model…

Recently, someone on the LearnMMD team was bemoaning the fact that many MMD animators only animate the upper torso of models and that their legs were never touched. To which, at least two other team members, myself being one, responded by stating essentially, it really is only necessary to create animations for those parts of the body that can be seen.

Further, the point was raised that singers in real life, don’t actually move that much. Also that high energy song and dance routines very often made use, to some degree or other, of lip syncing technologies.

How to be a MMD “con” artist

But what this article will be about is basically how to successfully create a complete performance where you don’t need to animate the model at all except for the lip sync and minor eye movements.

To pull this off, you only need a few things:

Yes, “magic“: the type stage magicians and illusionists use. Not to mention the con artists that used to hang around subway stations trying to fleece innocent passersby of their small change…

Specifically, since the model won’t be moving, you create the illusion that there is movement by “creatively” moving the camera view POV.

Also, you want to use as much distractive visuals as you can reasonably get away with. Specifically we mean the use of:

Every successful stage director (and con artist) throughout history knows this one: Make the audience see what you want them to see, not what is actually there.

Being cheap doesn’t mean being bad…

Now, straight up: you’re not going to be able to fool everyone. But that’s not the point. The point that we are making is that you can make a very presentable MMD video with actually very minimal work, provided you “do it right“.

You just need to have a good “plan“.

You can actually make videos with just still images. Many music videos on YouTube do exactly this; but although you can do the same thing using MMD, it does have a user configurable camera, so you can do a lot better than just create a PowerPoint slide show.

How to get this all done

I could go into discussing the tricks and concepts behind doing something like this for pages worth of text which neither you nor I will want to read, so instead, I will just walk you through an actual example to show how it can be done. I will also tell you straight up that you can do all of this easily in a single afternoon or evening without breaking a sweat.

Step 1: Have a concept – some idea of what you want to do

For this article, since honestly I just want to show you how to do something like this, I just chose a random song and the one I used was playing on the TV in the next room…

The song is actually a hymn: Morning has broken which most people should know from school; well assuming you went to a Christian school, like I did. Actually, I went to an English boarding school, like the one Harry Potter went to, but that has no relevance here. The full song is about 3 minutes long and honestly, it would not be hard to animate in full, but we’re going be really lazy with this version. We’re only going to do the lip sync for the first two stanzas.

Step 2: Having a good audio track

I bought a version of the song off Google Play for 0.99 cents, so that’s a bargain. I then cropped out the section I wanted and made some quick tweaks to making it brighter and more cheery. The final track used was then saved in Windows WAV format for use in MMD. By-the-way, I used Audacity for this part of the process. It only takes about 10 minutes to do. 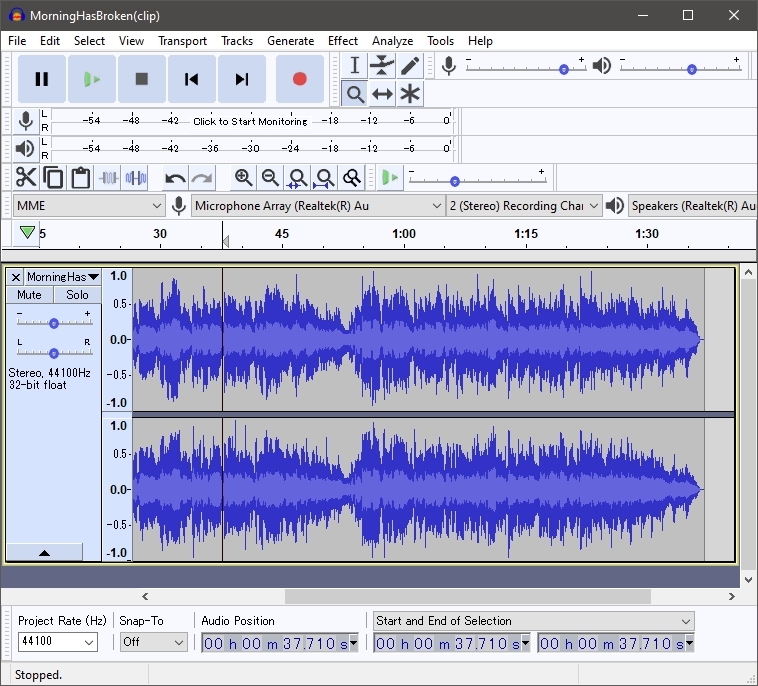 I used MOGG Face N’Lips for this process. Maybe this took about an hour or so to do. To be perfectly honest, it is not highly polished but presentable. BTW, at this point it is generally a good idea to choose the model that you will be using for the performance. I did, select one to begin with, but ended up using another one because the first one had a really strange bone structure and I didn’t want to deal with it. 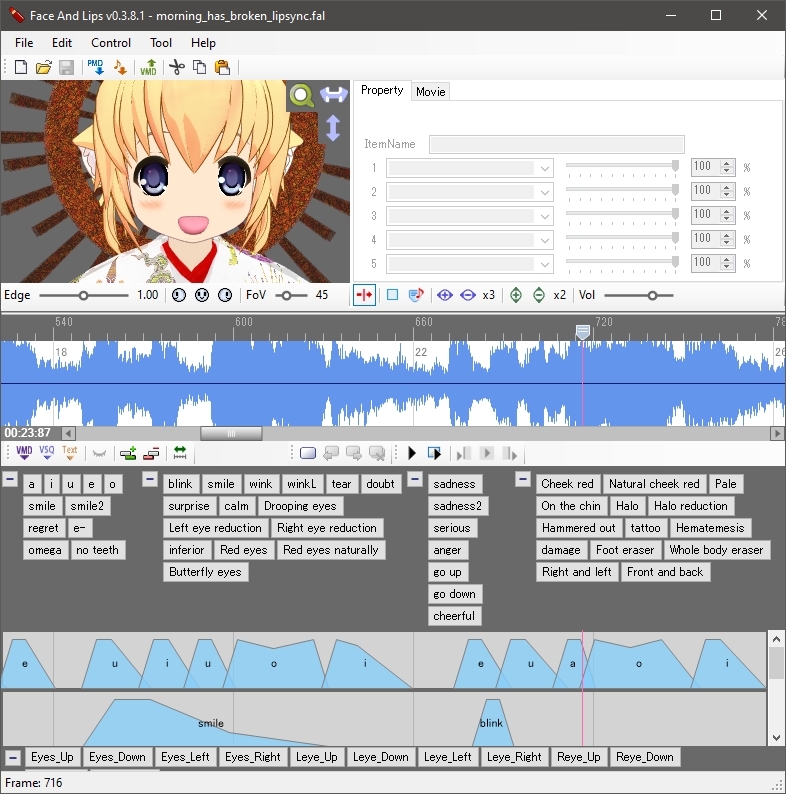 This takes only about five minutes. Longer in my case because I ended up having to swap out the models due to the issue with sleeves mentioned above. Anyway the image below shows the initial set up in MMD with the pose and lip sync loaded. The model used is named “Kagura” – since it is really hard to resist a miko model that looks this good and with the name “Kagura“; especially since she comes with tuck-away sleeves which was the other thing that I didn’t want to have to deal with. 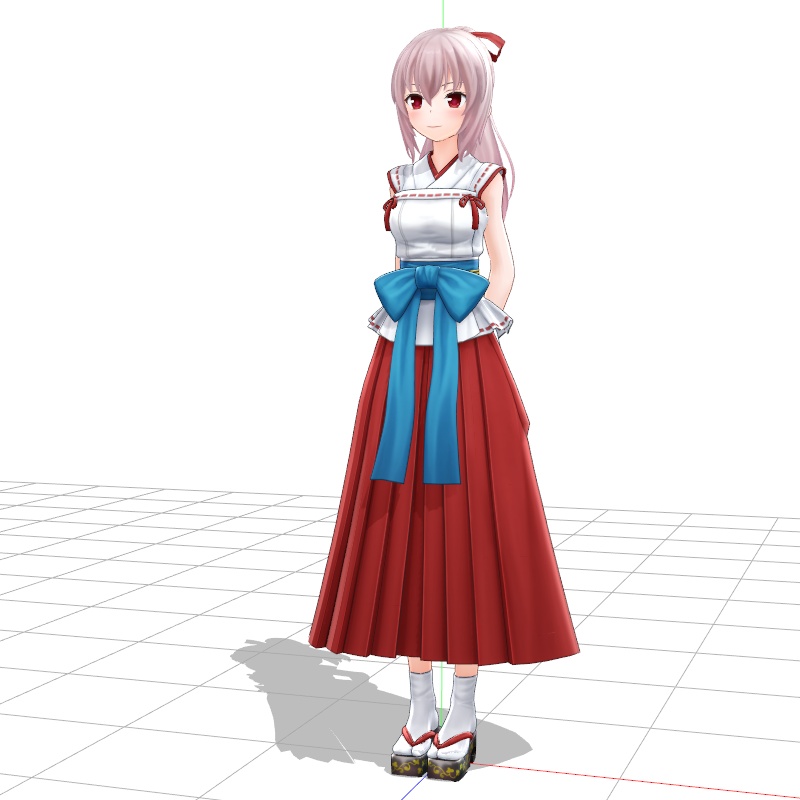 Now by this point, you might quite rightly be asking why I chose a model representing a Miko or Japanese shrine maiden. That’s really easy to answer. The song was originally a hymn and honestly I was too lazy to find a nun model and a church stage model to set her in, I simply chose to use assets I already have on my HD. The song lyrics works fine with almost any model anyway. I did toy around with using a fairy type model and honestly the thought of using a succubus did cross my mind; but I don’t want to end up burning in Hell later for making that kind of a choice…

In any case here’s the basic stage set up used: 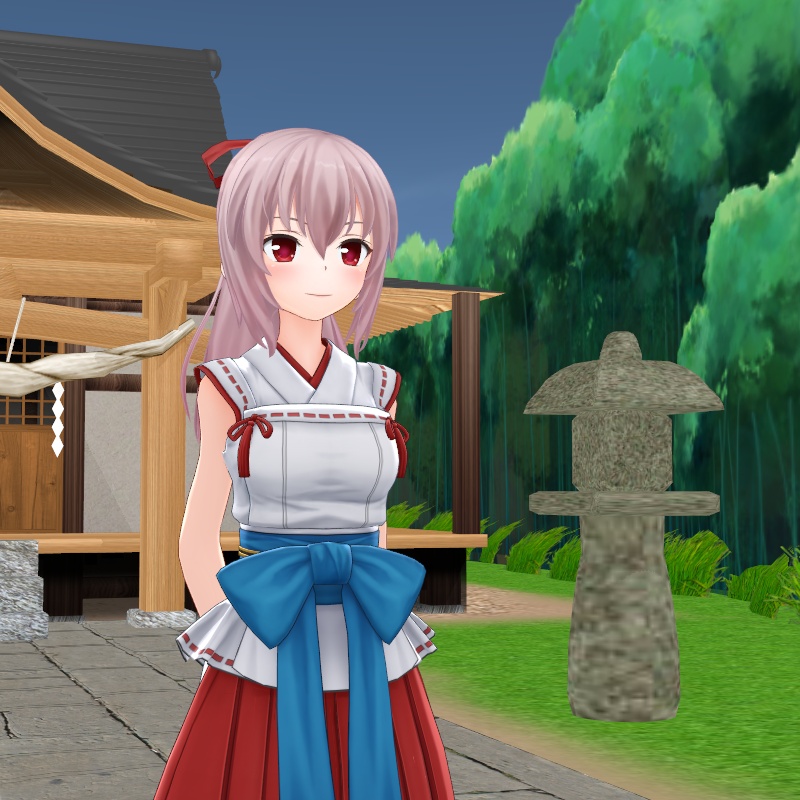 If it has got to look reasonably good, using RayMMD is a pretty safe option, so I just went with that. 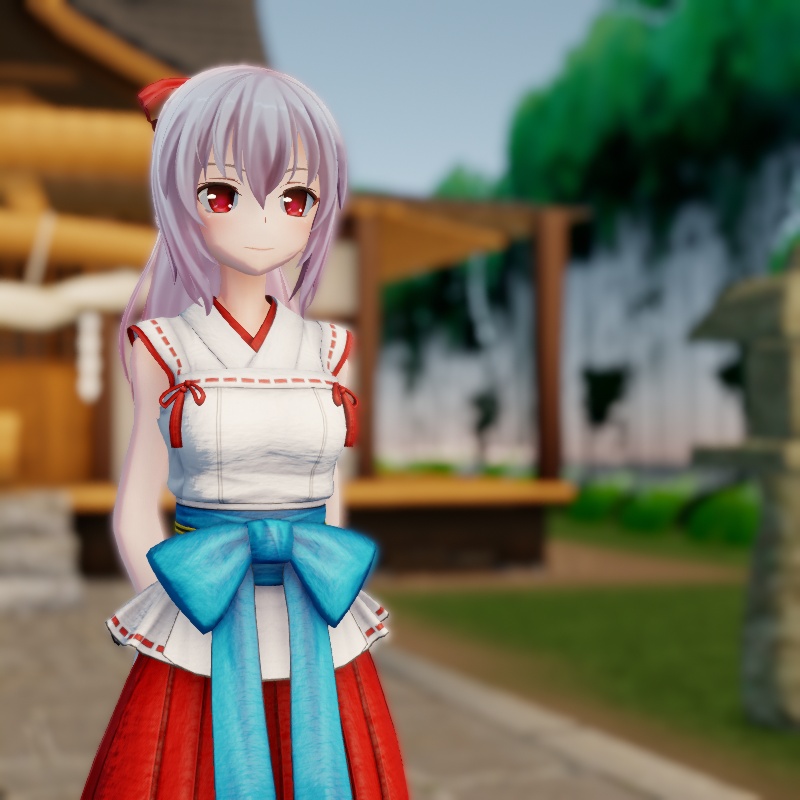 The next steps is the “fun” part. Lock your bedroom door, grab a large glass of your favorite beverage and just have at it. This is the creative part. Play with the camera and set up the key frames for your camera motion. This is the part which creates the illusion of motion. Work carefully as what you do with the camera will make or break your production in a project of this type.

Since your model isn’t moving much, except for the lip sync and eye movements, use the camera play to create the narrative. Work with the lyrics of the song but don’t be shy to go wild with the camera. 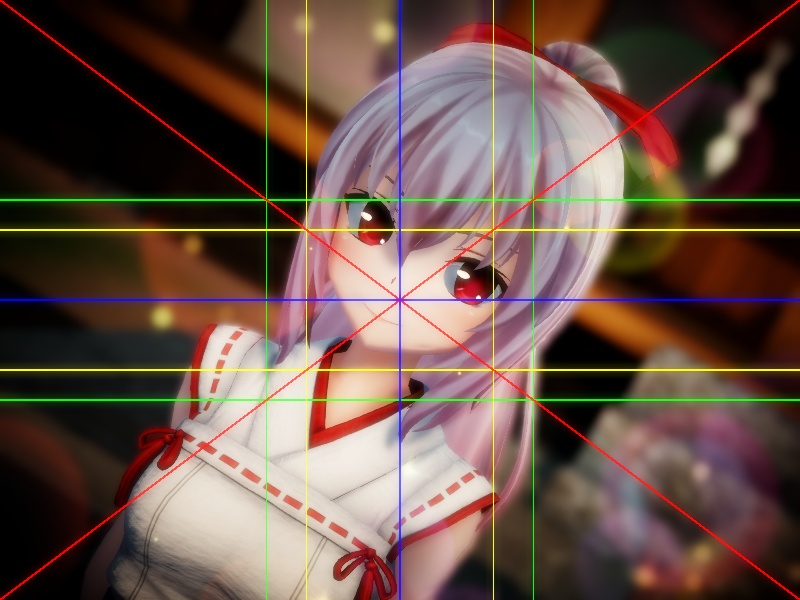 After the camera motion has been set up; dig up all those fancy MME special effects that you downloaded yonks ago but never had a good opportunity to use. Throw them into the mix and configure them to your heart’s content. Just make them work with your narrative and you’re almost guaranteed to get some really interesting and eye catching results. 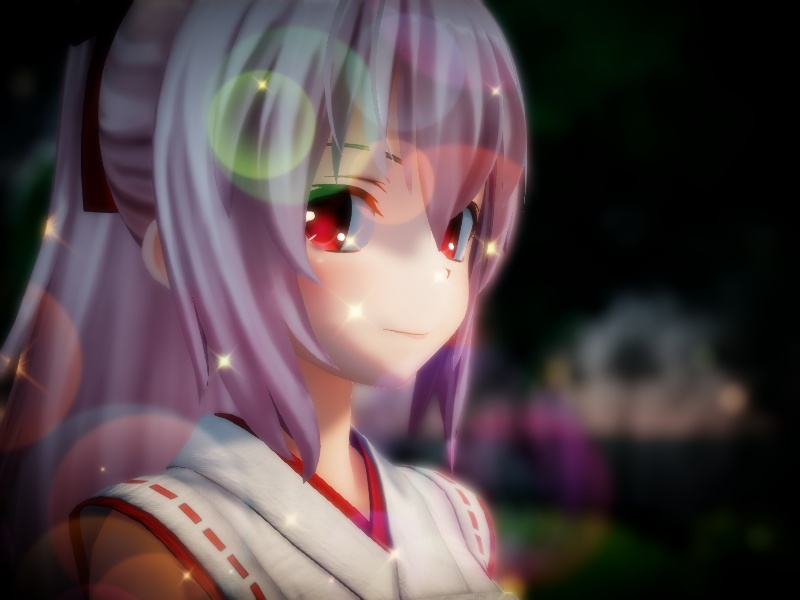 But above all else, have fun with this part of the process. Be creative!

Now, it should be apparent that even though the model never moves, especially as presented in this example, that in no way means that quality of the resultant video is poor or unwatchable. The only really “easy” part is that there is minimal animation work. But to make something like this work as a video presentation does require some degree of knowledge on how to create watchable videos.

But the basic approach is sound and is something that both experienced MMD users as well as newcomers can easily try their hand at. And I do encourage you to try it.

It is not as easy to do as you may have initially thought. Also, by trying to do something like this, if only just to pass a few hours in the evening after school or work, it can be a very illuminating experience. Besides which, it really does give you a chance to try things that you might not otherwise want to do and develop techniques that could be transferred over for use on more complex projects.

In any case, the “proof of the pudding” can be viewed below. Thanks for reading and we hope you found some useful pointers in this article. Comments and questions are welcomed; please post these in the comments section below.

Full disclosure: The video shown above from beginning to end only took about 4 hours to make; and truthfully, that was half before dinner and half after since there was nothing good to watch on TV this evening. Plus it was also done as a distraction from some other real life, but tedious work I had to do on the computer this evening.

RayMMD 1.5.0 (main shader)
Diffusion 7 (used as a blender)
o_psSepia (used for tinting the start of the video)
Otome_v004 (the bubble and sparkly effect)
Kozu (overlay for setting up the camera shots; see image with the grid for reference)

How do I make smooth motions in MikuMikuDance? What can I learn if I study ...read more