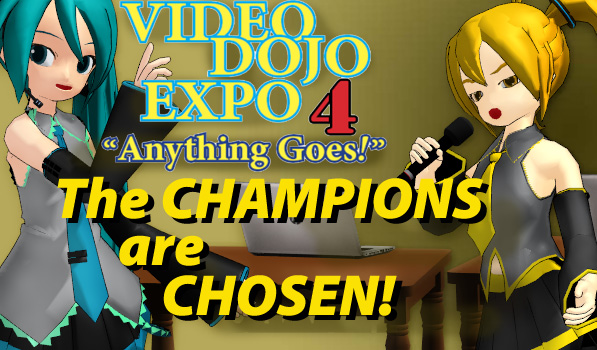 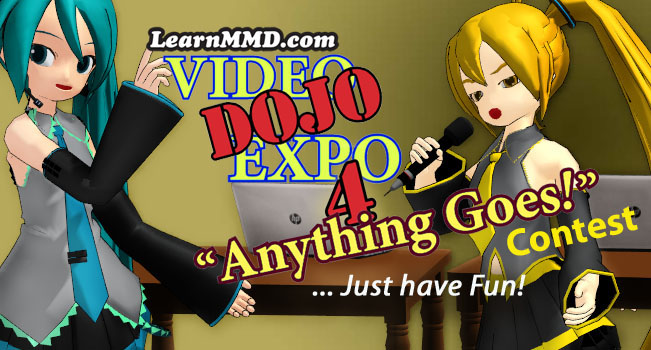 LearnMMD’s Video Dojo Expo 4 was subtitled “Anything Goes!” … and just have fun!

No restrictions were placed upon content other than no commercial entries and do not use content that embarrasses Reggie.

TWENTY-FIVE Videos and only SIX winners…

Champions will get an article on LearnMMD.com and will have their video enshrined in our Video Dojo Expo HALL of CHAMPIONS!

The CHAMPIONS of Video Dojo Expo 4…
… all Equal Champions…

… and the LearnMMD Team’s choice:

… your efforts are enshrined for all eternity in
The HALL of CHAMPIONS!

We are so honored to have received Twenty-Five entries. The actual judging is very difficult because each of us knows how personal and how technical each MMD animation can be.

I chose to “go” with YamiMori’s “Gasoline”. The whole active LearnMMD team was positive about this animation noting the beautiful custom model and the stunning atmosphere in the production… great set… great effects… an

English language song… a most impressive MMD video! We were put-off by the moment of crude language… nothing we can endorse in an MMD animation… but I did not restrict this video for using that MMD meme song and motions as its basis.

To pick an honorable mention would be to pick the other EIGHTEEN videos… each is so wonderful in its own way.

I cannot squeeze ’em all in, but I did want to write about a few of my favorites. … PLEASE take a look at the “voting page and see all twenty five of the entry videos… magical creations!

We liked #H “Roly Poly” by Romeo Shappy for it’s old-school MMD “look”… a gang of compatible models all doing, essentially, the same dance motion… stupidly fun to watch for some reason.

The two German Battleship animations by MMD x Azur Lane Ironblood are a feast for the eyes! The effects, the stage… the models! … a really amazing cinematic effort… BOTH of them!

“Es por tí” by SOL MMD grabbed me by the heart… it is completely custom made and the over-all depth of color and the dreaminess of it, the scenes and the uneasiness of it are very touching. … Spanish language MMD! … The guitar looks to have been outside-parent OP attached to the left “claw” which caused the guitar to whip-around as the model moved… would have liked to have seen it attached to the lower-body, maybe, for a bit of stability… that guitar-waving action was most distracting… but I really liked that video… so much effort and much emotion… beautiful.

Tweetsie #12 Studios: Animation Division‘s “Narrow Gauge Wassup” is simple MMD entertainment… I enjoyed the simplicity… the humor… the “fun”… I am always reminding us to Have Fun with MikuMikuDance… and this little animation didn’t get any votes (Sorry!)… but stands out from all of the rest as a quick smile on the face.

“Snobbism” by Leona -Chan is another of those Feasts for the Eyes… so many wonderful effects, so much control… great models… a really nice rendition of this popular MMD animation.

“Mae’s First Comedy Routine” by Mae Blythe is another custom-made, totally from scratch animation. … and also, totally off-the-wall! … What a great idea: doing a stand-up routine as yourself in MMD. Complete with audience laughter and groans… sometimes funny, sometimes very personal… an amazing MMD project.

MMDers who know me know that I like the short ones… and THESE two are very short! It’s fun to make these because you get an idea, an inspiration… and you knock it out in an afternoon, or less! … That’s “Uh Meow but with a twist” by Rotalder01 and “MMD Oh Nanana” by blazeraptor with a custom model!

“Tsumi No Namae” by apleYT is another beautiful custom model and another Feast for the Eyes… Wow, the stages are nice, the motions very nice and the Miku model… beautiful… there is a LOT of work in this animation… and so well done… amazing to watch.

Sorry if I missed writing about YOUR animation. I hope everyone will visit the old Vote Page to see all twenty-five VDE-4 Entries… a wonderful cross-section of MMD animation!

We had NINETEEN entries in our VDE-5 competition!  The entries needed to show us "Summer"... They needed ...read more

Video Dojo Expo Five Entries... The VOTING is Done! We had  these NINETEEN Entries! Our competition got ...read more 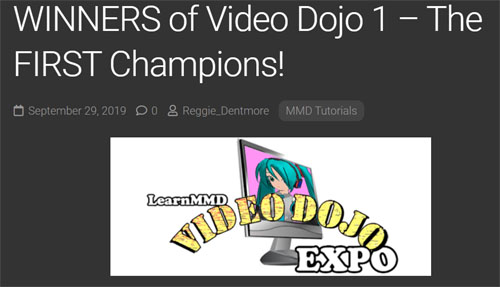 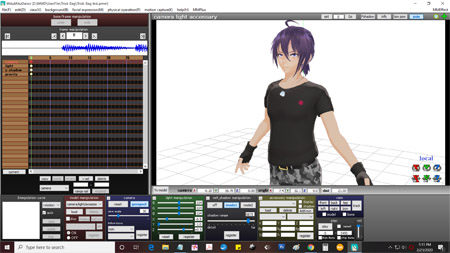 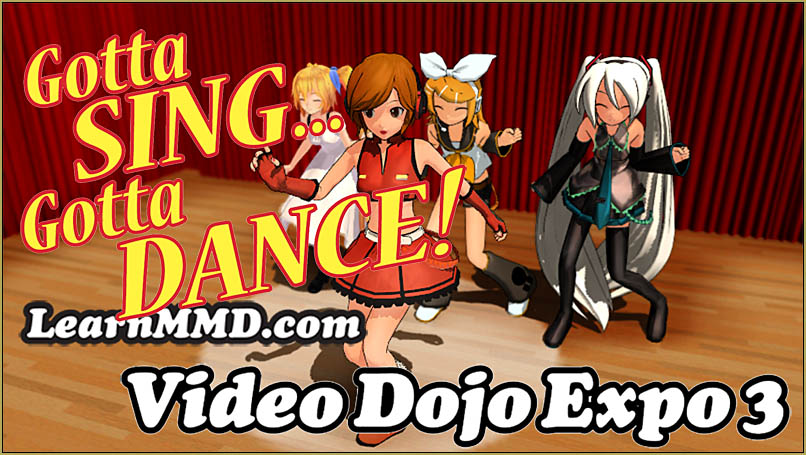