I recently wrote an article about MiyukiOhayashi’s “CRY BABY” motion download… and included in THAT download is a folder with the WAV and motion files for “Pity Party”!

I searched-around on YouTube to see the many MMD “Pity Party” videos… and saw some at over three minutes long and many at the 75-second or so length… THIS download gives us the 75-second motion… perfect for a quick rendition.

Did my invitations disappear
Why’d I put my heart on every cursive letter?
Tell me why the hell no one is here
Tell me what to do to make it all feel better

Maybe it’s a cruel joke on me
Whatever, whatever
Just means there’s way more cake for me
Forever, forever

Why a Miku Pity Party??

… and besdies… NOT POSSIBLE to edith the motion files because they have been run through “Animation Smoother tool”…. which analyzes your motion and registers diamonds for all used bones in every frame… EVERY frame… 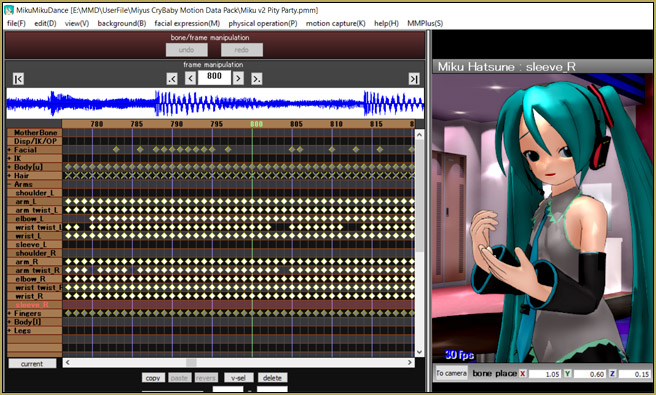 … so there is no way to edit a motion! 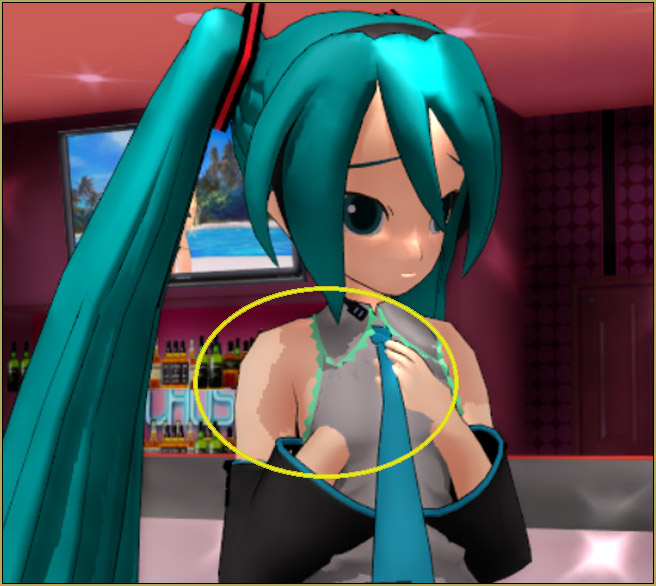 I tried several models, including TDA models because we know that these motions make use of a TDA models best features. … but Nope! I did not find a model to run this motion without colliosions. So… back to my favorite Miku!

Use CAMERA motion to hide the collisions!

MiyukiOhayashi DOES give the OK to edit the Camera Motion… and that file is in the usual MMD format. So, that was my tool for “fixing” those many collisions… I simply did NOT show them.

The original camera motion does have plenty of action, cuts, and creativity… I just added MORE.

I spent more than several hours fine-tuning the camera motion.

One of the VMD files is DISPLAY!

You are supposed to load that file onto your model, too. DISPLAY.vmd causes the model to “flicker” when the horns blast Da-Da-Da-Da! … Using BlackOut3, I made the screen black for every one of those stuttering “Da” music moments (see the Video), and each frame the “black” snapped-on, I changed the camera on Miku so she’d be in a different pose each time the black snapped-off, again, and we see her for an instant. Each of those “snaps” is only like about 3 or 4 frames, so it’s only a quick glimpse of Miku that flashes by during those moments.

The DiscoLightEx_v003 makes it more lonely… ?

That was my intent. The DiscoLight filled the room with a bit of the party atmosphere…
The Disco Light is ON but there is no fun in the room.

I added Real Figure Shader to Miku… giving a soft shaded 3D appearance. I also added SSAO-Lite to the entire scene for a nice depth of color and shadow. I think these older shaders are just fine… easy to use and they look good. … I used BlackOut3 to Fade-from-Black and then Fade-to-Black at the start and end of the animation… gives a ‘finished” look to the animation on YouTube… and as I mentioned, I added moments of solid black to those “flickering” moments.

I think that’s it!