The Collapse Effect; How do I use it?

So, Yuuki, what’s it about this time?

Hey guys; Long time no see!! Do you not… remember me? Whoa, super rude! In case you don’t know who I am, I am a new edition to an amazing group of MMDers like you! My name is Yuuki, and this is my second article you’re reading as I type. My first one was about the Light Manipulation Panel, and how you can use it to easily make your pictures and videos look cool! This one is on the collapse effect; I mean, that’s why you’re here right?

Let’s go get the effect…

So, below is a small article on how to use the collapse effect, and if you’d prefer a video tutorial or if this one is TOO confusing for your super-awesome-genius brains, check out my video, here, on how to use it:

There is one, little requirement that you need for this effect: You MUST have PMXEditor!! If you do not have it, here is a link to the English version if that’s easier for you: http://eoscustom3d.deviantart.com/art/English-Pmx-Editor-470421452

I would also like to note that if you’re confused as to how PMX works and if you’ve never used it before, then… that’s completely fine!! Make sure to follow me and how I use it so you can get the job done! Also, I will answer some questions at the end of the article, so stay tuned if you screwed up and need assistance!
Well, let’s get started shall we?

Well, the collapse effect makes your model disappear into nothing basically, as if it was slowly fading away. An example is below, because I’m a magical person! 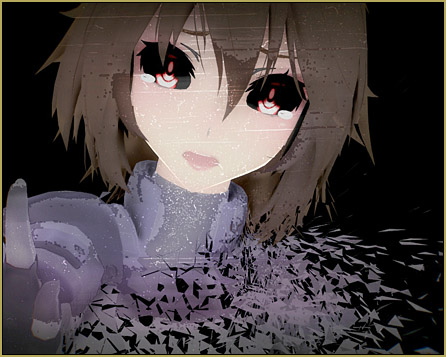 The Collapse effect, which is created by 折鶴P (OrizuruP). (image by Yuuki)

The Collapse Effect can give your images many amazing looks if used correctly, and it can easily be added onto anything that is a PMD, PMX, or X file. So basically anything you can load up into MMD and PMXEditor. So, now we can begin on this tutorial, right?

Alright, it’s not much; just a few things you need to make sure are done and a few things you need. First, you will need to make sure you have PMXEditor (check that off the list) and MMEffect. Also, I’d highly suggest having the newest MikuMikuDance. Don’t know where to get that? Check out the downloads on this very site to get the newest version!!

YOU GORGEOUS READER STOP WHERE YOU ARE!! DO NOT GO DOWN! PUT YOUR HANDS IN YOUR LAP! Before you continue, change your local settings to Japan or it will not work!! To do this, go to your control panel > Clock, Language, and Region > Region > Change Location. Then click ‘Japan’ in the list and apply the change. Okay, you’re done. Sorry if I frightened you small child. I only wanted to protect you.

How do I use the collapse effect? *poking intensifies*

Well I can first suggest you stop poking it!! It’s not magic ya know?! Geez. I can guarantee that it’s not as simple as loading it in the accessory panel or loading a .fx file into the MMEffect tab; it’s not that difficult either though.

We are going to modify your model’s files so that it can “do” the collapse effect.

Anyways, load up your model in PMXEditor.
FIRST THING, do a SAVE AS and save a copy of your model with a new name… like CollapseMiku.pmd, or something, so that our changes are not made to your original model.

Alright, now go to Edit > Plug-In > CSScript > (S). Just press the button with the ‘S’ in parenthesis or just ‘S’ for a shortcut. 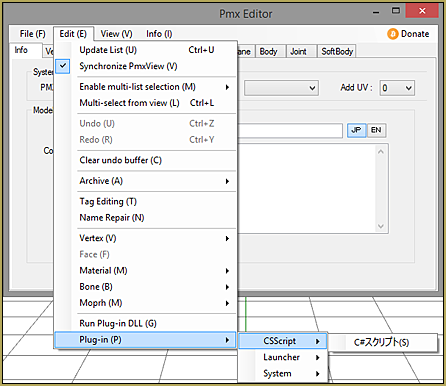 After that, a small window will open that should say ‘CSScript’ If you’ve used PMDEditor, this will be super easy for you! 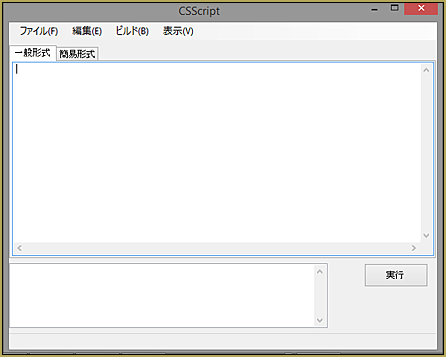 Just go over to the file and click open. You know that much right? In case if you don’t here’s an image 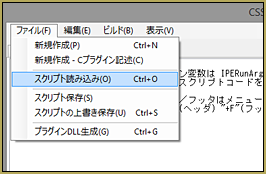 Then go to your effects folder (or where ever you put your collapse effect folder) and open the following file on the right image here: 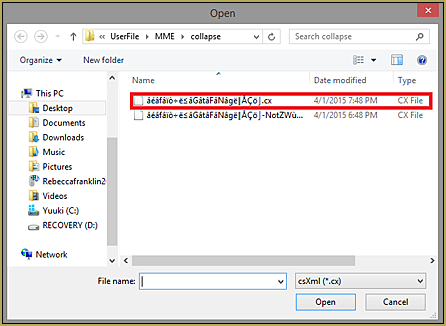 Please make sure it does not say the words, “NOT” in the file name. Even if it’s gibberish or actual Japanese characters, you can still see that word in the name. I’m not exactly sure what it does (go “YOLO!” and load it if you wanna) but to use the effect, you CANNOT load it.

So after you load it, a LOT of text is gonna pop up in the big box. Like, a lot. Just promise that you won’t mess with it okay? Mainly because you don’t need to mess with it! Just simply click the button and SHIZZAM!! Magic. 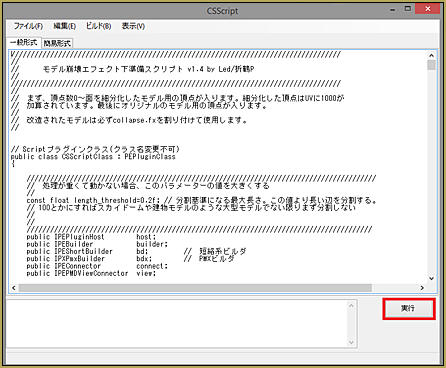 It will take a while to load though (depending on PC speed and just how long it loads) so DO NOT close out of it no matter how long it takes. Even if it is not responding!!
So after it loads, it should have text in the bottom box. 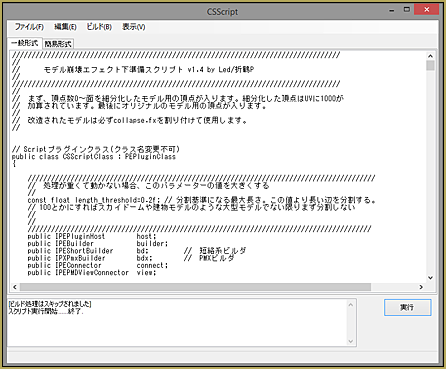 Then close THAT WINDOW ONLY.

NOW you can close your PMXEditor and open up MikuMikuDance! Yay!! Now this part is pretty easy, so sit back and relax as I go step through step of this part with you.

I loaded my model in MMD. Now what Yuuki-chan?

Please don’t go all Honey-senpai on me now (No OHSHC fans? No? Okay bye)… Well, now you load up your new MMD model silly!! Isn’t that a little obvious? It’s not like your hacking a high security program or something.

A quick note: according to some people, some model’s textures get all funky when they load the model they edited for collapse. Don’t worry about it and do not close your MMD window! This might happen but once you load your effect onto the model, it will be back to normal.

Well of course after you load your model you can go load up a stage, a pose, and other things, whatever floats your boat. If you wanna get straight to the chase however, go to your MMEffect tab and Effect Mapping 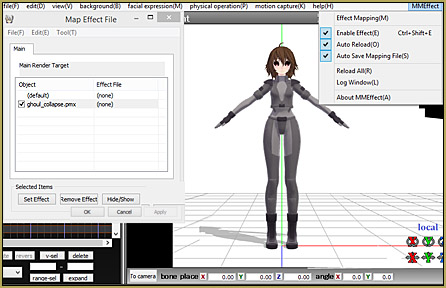 We’re not done yet, but it’s only one more step away!! Load up a model; this time however, go to your collapse folder and load “collapse_controller.pmx” 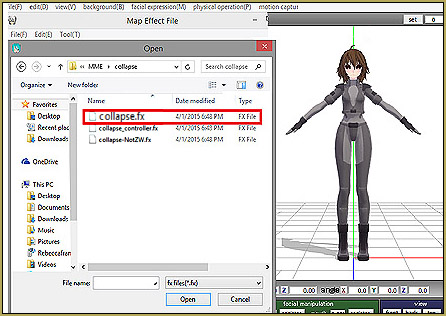 Move the Collapse bone around and BOOM!! Just move that around and you’ve got what you wanted! 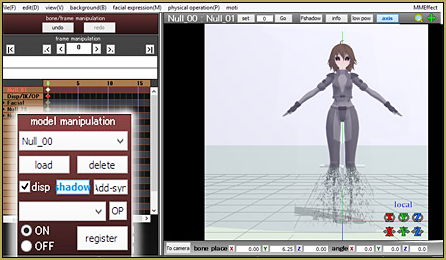 To get it a certain way that you want requires patience and moving; also registering the bones so you don’t lose your progress. Also, if you don’t want that other stuff to show up (the controller the other things) Go to the model manipulation tab and click the “disp” (display) option and register. 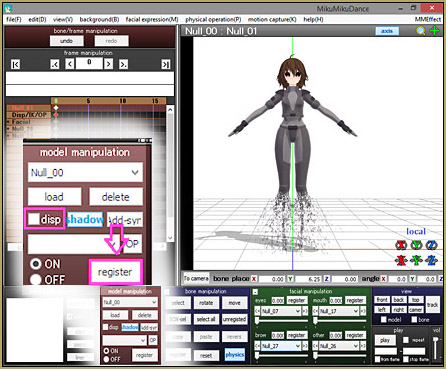 Q: My model is all white. Help?

A: You need the newest version of MMD OR you saved the model in the wrong folder. Save the model with the effect in the same folder as the original model.

A: You need to change your country settings to Japan, as shown in the video.

Q: Everything is done correctly, but it still won’t work! Help?

A: You might need to get the newest version of MikuMikuEffect, which can be found here at LearnMMD.com

A final note: The ReadMe included with your Collapse Effect download indicates that there is more TO this effect than just using it like we did, here… things like using subset-extract to have the effect affect only PARTS of your model… I tried to make an English translation of the ReadMe using Google Translate… and have it HERE for you. It is, as usual for a Google translation, in broken English… but you can work out the meaning of it.

That’s all for this article! Have any questions? Ask them and I’ll try my best to answer~ ~Yuuki