I have created several MMD animations from scratch over the last few months and I have discovered this little trick:

Sometimes you need
a “motion scratchpad”
while animating in MMD

I would be working along, trying to make an arm move just right as I also twisted the model’s body… and it “looks pretty good”… but I wonder how it would be if I did “THIS”, instead… ? … but I don’t want to lose the nice motion that I already have… and I could SAVE and then try my experiment… or I could load another model and copy/paste my existing motion onto THAT model, just to hold it in case I want to USE it again. … Get it? 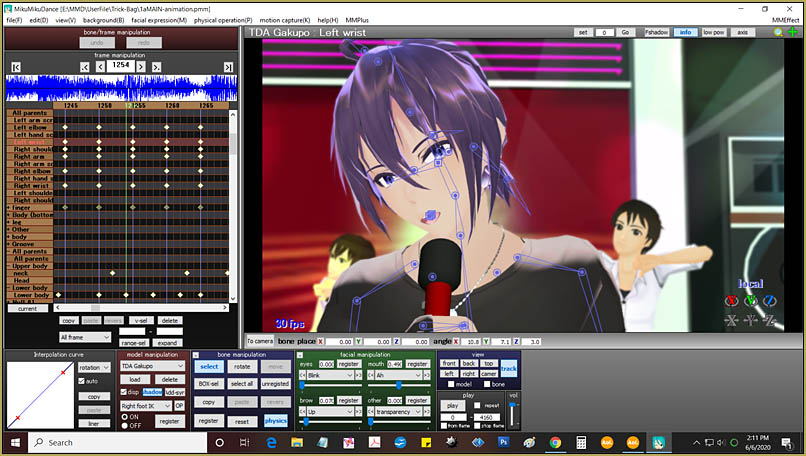 My “Trick Bag” animation motion for Gakupo was created from scratch. I took my cue from Mahlazer’s “Feel the Sound” animation and created a registered frame every five-frames for Gakupo… and I kind of did in “waves”… I started with his basic “gyration” movement, which I copy/pasted so as to cover the entire 4600 frames… and then I went back in and made tweaks and changes to it for each time I needed to bring the mic up to his face, or each time I needed him to turn or gesture to the audience… and SOMETIMES, I needed to redo or recreate a portion of the motion. It occurred to me that I could copy/paste some of the best bits into an off-stage model… and so have that bit available, again, if I needed it.

So, I loaded another Gakupo model and unchecked his “Display” checkbox. It was, like, a TOTAL FREEDOM having that guy available as a scratchpad. I could paste bits of a motion segment onto him for safe-keeping while I experimented with new ideas… and if I decided the experiment wasn’t working, I could delete those new diamonds, visit my “scratchpad Gakupo” and copy the old diamonds BACK, again. 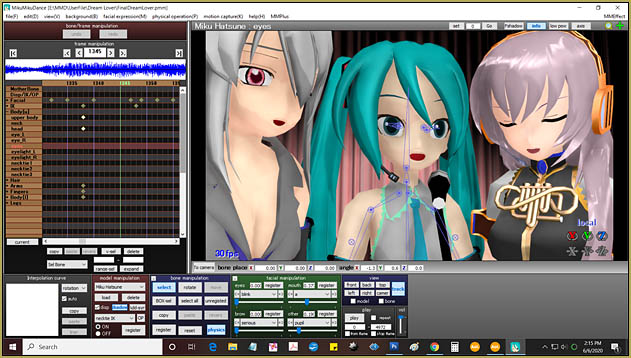 My “Dream Lover” video was created completely from scratch and, again, I had an invisible “Scratchpad Miku” where I could “jot down” bits of motion that I could always copy/paste, again as I needed them. … With all three of my models being the basic Animasa models, I could copy/paste the same motions back and forth between the three models knowing they’d work properly. … I felt more in-control of my operation as I  used my “scratchpad”.

Not anything more to say…

The scratchpad idea is a simple one… helpful and easy to do.