The PostAnalogTV effect gives you top-and-bottom or right/left close-to-center scene transitions. I am tired of “fade to black”, what else can I use? The old Blackout effect is OK, but I want something different. How can I distort my picture to look like it was on an old TV set?

While clicking around MMD videos on YouTube, I saw a nice scene transition that closed-out the image to black, looking like switching-off a modern LED TV… it closed from both top and bottom to the center… 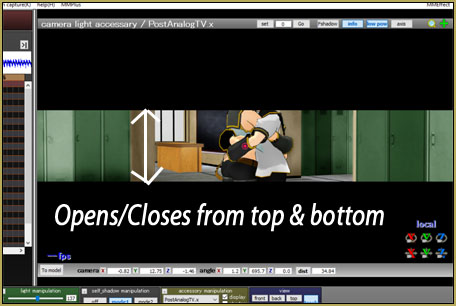 I left a Comment on that video asking what she had used, there… and the answer was: PostAnalogTV effect.

I did a quick search and found a dA page with a LOT of effect links, including a link to download the PostAnalogTV effect.

That effect creator, かき, has a tutorial video on NicoNico…
http://www.nicovideo.jp/watch/sm23003701
which is in all Japanese language. Not understanding Japanese, I still watched that video and saw examples of many of the morphs and permutations available within the Effect. There are even .VMD motion files to drive some of the variations.

I was really only interested in those top/bottom and sides-to-the-middle scene transitions… and they are easy to do using the “Brow” morph sliders of the controller model.

Load the Controller.pmd model AND a .x effect…

For this effect, you load both a PMD controller model and a .x effect. The trouble I had was that the Controller model has MANY morphing adjustments available… and all in Japanese lingo! … I opened the Controller in old PMDEditor 0139 and selected Edit-Batch Name Correction… but the Morphs had no names, Japanese OR English… or, at least, I did not know how to SEE them… So I closed PMDE 0139 and opened the latest PMXEditor 0254f… and THERE I was able to see the list of Japanese morph titles and following XxBodger’s method, I was able to translate and rename the English list of morphs using Google Translate. It became time to SAVE, and in PMXEditor 0254f, I could only save as a PMX model. When I then opened the Effect in MMD, I was able to load the Controller.PMX and see the English names of the morphs, but the effects did not work. That model needed to be saved as PMD. … I opened the original Controller model in old PMDE 0139, again… went to batch-correct the morph names… and, like before, saw no names, English OR Japanese. I went ahead and pushed the proper buttons to load the English translations… and pasted that list of English labels from Google Translate… and said OK… and was able to re-save that controller as a PMD. … and… it worked… English labels in the morphs AND the effect now worked properly!

To make it EASY for YOU… I have put the Controller model with English into a ZIP folder for you. Please unzip that folder using Bandizip. (Bandizip does not mangle Japanese file names like other “unzip” programs do.) ALSO in that zip folder is a translated README file… The creator put lots of notes into that file to help us learn to use the effect. PLEASE do read those notes… you will get many hints about using the PostAnalogTV effect. 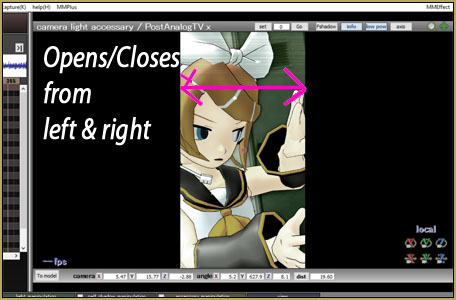 Theses morphs animate as you would any bones… you REGISTER your current position of the morph… advance a few frames and slide the slider to get the effect you want and REGISTER that new setting. Push PLAY and watch the smooth transition.

– – – HINT: When opening with a black transition… keep the solid black on-screen for, like, a whole second so that, as the viewer watches the video, there is a moment of black-screen time before that animation begins… it looks so much better than having things pop in the first instant. In the closing, too… let the screen go black and BE black for a second, or two, before you cut the video.

TONS of ways to foul-up your image so as to look like an old out-of-adjustment TV set image.

The top-two choices in the BROW menu are the transitions adjustments… ALL of the others adjust the picture quality. In the OTHERS section is “Film Waste Noise” which actually mimics a well-used/dirty film playing on a movie-projector… kind of a fun effect to play with.

ALSO in the OTHERS section is Test Pattern… 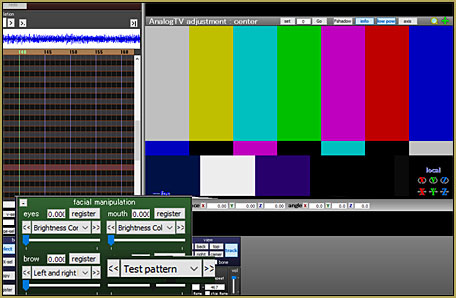 … which replaces your animation image with that standard video test-screen…. as if the TV broadcaster was having “technical difficulties”.

For a demo video, I chose to modify my old “Rin Needs a Hug” animation. I used the same set-up of a nice hug-in-progress as the scene opens… and I used the Upper & Lower Black morph to go from black, into the scene. … LEN looks-up to see that they are no longer alone! … My plan was to have LEN be the MAN and get mad at us for peeking-in! … but that basic Animasa LEN cannot LOOK angry!… his facial adjustments do not include those morphs. RIN is able to look angry… so I used HER as the one to complain about our  interrupting their private moment. … and then, as I tried to close to black, again, this time from left and right, Rin tries to hold the door open… but fails.

ALL of the effects and distortions you see in that video are from this PostAnalogTV effect. (Except I used SSAO-Lite to enhance the color and shadows of my set and the models.)

The stage is the Harner Productions/SachiShirakawa’s model MMD inside of school. Models are the standard Animasa Len and Rin Kagemine.

Give this effect a try… I have only scratched the surface of the many effects and distortions this MME effect can create for you.

LearnMMD.com is BACK ONLINE, again!

Where can I download MMD Stages? Is there a place where I can download a ...read more

I just saw an ad on these pages for a free video editing software from ...read more

How do I use the TrueCamera effect in MikuMikuDance? How can I keep the focus ...read more