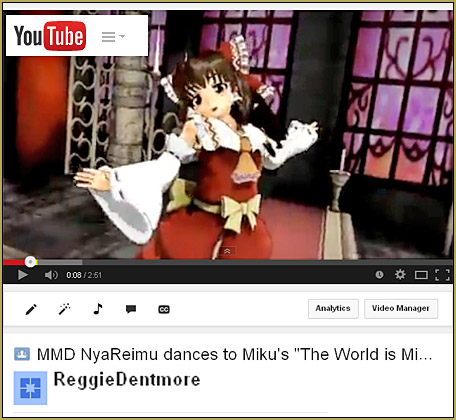 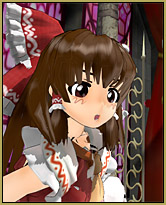 I know her as NyaReimu … but her official name is:
Reimu Hakurei [Version] V1.2a (Version 110509a).
The old page where I found the link for her does NOT have a link to her files anymore:
http://homepage3.nifty.com/knuko/mmd/mmdIndex.html … but a reader gave me THIS Link that includes NyaReimu … and a bunch of other fun things!

The “ReadMe” specifically says “Do Not Redistribute” … so I cannot share my model with you. 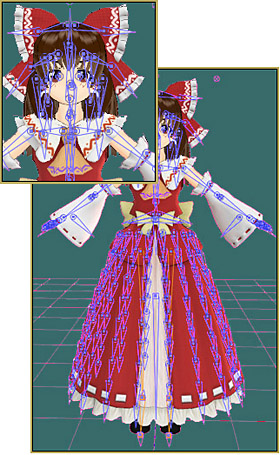 NyaReimu is the most complicated of my models. All of those flowing fabrics are properly weighted … LOTS of bones … the physics works very well. As you watch my video, watch carefully and see that at no time is there a failure … the skirt flows beautifully, the hands never pass through the sleeves, or anything like that. (OK … there IS one moment where her right sleeve flutters against her body “:o).

I first made this animation as I wrote my previous article … a tutorial to help MMD newbies to make their first MMD music video. In that article, I used the model Mew that was supplied in the links that I referenced for that project. 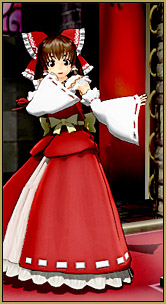 When I was done with that project, I played with the animation, a bit, and decided to upload THIS version to YouTube, just to show off the model.

One of the tweaks I made was to adjust the video size from the original animation’s 512×385 “academy format” to a 16×9 widescreen 512×288. Although the widescreen was a good idea, my numbers are too small … and, at best, the video looks kind of low-res on YouTube!

The “World is Mine” dance is high energy … but the frantic motions become much less-so when translated through the gentle swaying of NyaReimu’s beautifully-weighted heavy fabrics.

Except for NyaReimu, the links for all of the files used in this video are found in IA Vocaloid Channel’s video:
http://youtu.be/68kWqxOWvd4 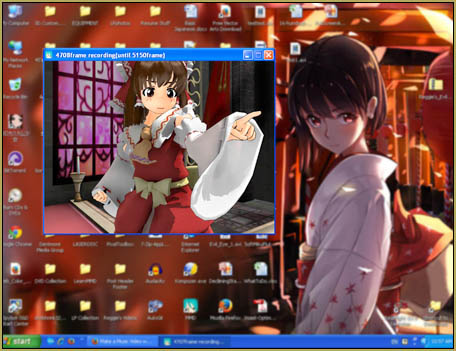 … and my complicated model … and the MME SSAO_Lite effect … slowed my computer to a CRAWL when it came time to Render to AVI.

In-fact, the first time I tried to render the video, my computer locked-up at about frame 580; the monitor went dark for a couple of seconds and, 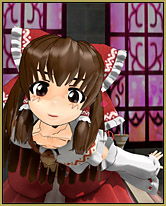 when my desktop was again visible, there was a large error message announcing that the ATI Video Card had suffered a temporary failure.

I closed MMD … opened MMD, opened the dance, made sure the settings were correct and, again attempted to render to Video … and AGAIN had that failure occur … got that same message … at frame 620, this time.

So … I shut off the computer.. I know that it was hot; had been running all day … 14 hours, at least?? … and I waited until next morning. Then, I started the computer, opened MMD, and did a Render to AVI before the system had time to heat-up… SUCCESS!

Enjoy watching NyaReimu dance to Miku’s “The World is Mine”.

How do I use the TrueCamera effect in MikuMikuDance? How can I keep the focus ...read more