How do I make my own MMD animation?  MikuMikuDance videos are complicated… where do I start? What’s an easy way to make my own MMD video? How can I know my music choice will be OK with YouTube?

Workin’ on my VDE-4 Animation…
…The Easy Part is Complete!

I was listening to some dumb old sixties bubble-gum rock off of a “girl groups” CD and I “had a vision” while listening to this song…. The Paris Sisters, 1964, singing Bobby Darin’s 1958 hit: “Dream Lover”… and I found this video on YouTube…

They DO look like SISTERS, alright! … fun how simple that production is… and watch the lead singers hand flip-up at the last note of the song. … I can do that!

My “process” starts with the Soundtrack…

How do I know that YouTube will allow me to use my music?

YouTube has become very strict about Copyright infringement, as it SHOULD be… but at the same time, they have made MANY “deals” with music publishers and artists allowing us “hobbyists” to use their music in return for our granting them the right to monetize our videos. … so we post a video and then we might see pop-up ads at the beginning of our videos. Many artists and studios… but not ALL… have said “Yes.” Those not on-board require that YouTube block your video if you use their music.

… So how do you know if your music is safe?

I use a couple of methods to check for “safety”.

I often do submit the simple video just to see what happens. … and, so far… no problems… Except some of my older videos are now blocked because I was using a clip from a PRINCE song that, after several years, was discovered and blocked. … Also my favorite “Departures” meme turns out to be a SONY song and most, but not ALL, of my “Departures” videos are blocked.

I did not test my music first. I decided to create my soundtrack and then slam the “look” of my project together and then submit THAT video to YouTube to see what happens.

The music, the original song, just suddenly “starts” and, as usual, I like to add a few seconds of “buffer” before the music starts. I used “Audacity” software to add my “applause” track (downloadable from Zero-to-450.com) to fill that void and overlap into the song, a bit, giving the feeling of being on-stage, live.

As usual, I decided to try to use the original models that are included in the MMD download. I chose Luka and Haku to stand beside the lead singer, Miku Ver.2. Luka and Haku are tall and have subdued colors that seemed to be a match with Miku for this project. … No, they don’t look like sisters. I loaded my models and loaded a pose onto each of them. 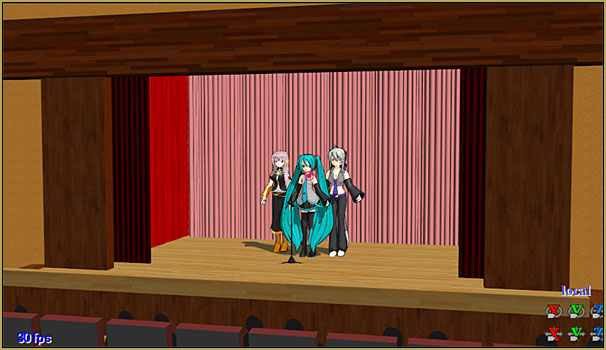 That first setup looks bright and bleak… no “life” to be seen.

I used the LearnMMD Auditorium Stage… and added one of the included Pink Drapes. It looks kind of depressing when compared to that bright music I was using.

So, next I did the basic camerawork. I was using Play WAV with Frame so that I could see and here the music.

The camerawork did a LOT to improve my mood and my sense for where this animation was going! 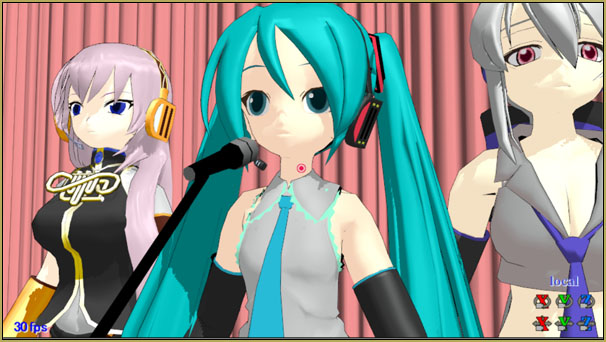 FIRST thing I did was to add the BlackOut3 effect. That gives me a Fade-from-Black at the beginning of the animation and a Fade-to-Black at the end.

Then I added the Spotlight  2.0 Effect. That effect is simple to use and yet is so powerful that it dominates the entire scene. You control the Si SIZE to the diameter of the light you wish… and the Tr for the brightness. … I clicked into Accessory mode so that I could move the spotlight up, off of the ground, and out into the House so that it would shine on my guys onstage. I also dimmed down those always-too-bright MMD main lights. 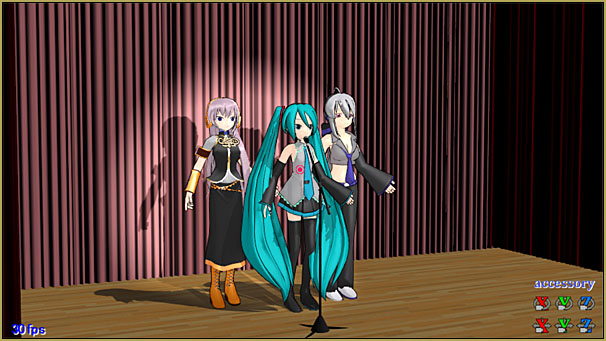 Compare this image to the 1st image, above… THIS is so much better!

Then I added SSAO-Lite… one of my favorite effects. It builds a nice depth of color everywhere… and also some probably unwanted shadows, but… I still like using it. 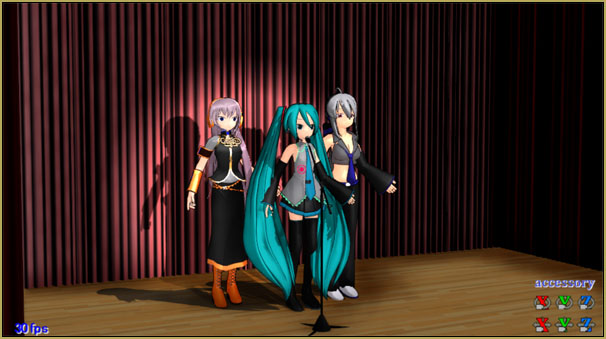 SSAO-Lite really adds “the touch” to the scene!

Next I added Diffusion 7 which softens the line-work of the models and stage elements. You adjust Diffusion 7 by changing the Tr number. … A value of 0.1 gives almost no effect while a value of 1.0 is the maximum. I use a value of .4 or .5 for a close-up and a value of .1 as the camera backs away.

Next comes SvDOF2 which controls Depth of Focus. Again, adjust the Tr value to adjust the focus. A small value, like .1 offers the greatest depth of field… use it for a close-up when you want the background blurred. … Change that value as the camera moves… you want a high number (minimum effect) for the long shots and a smaller value for the closeups. 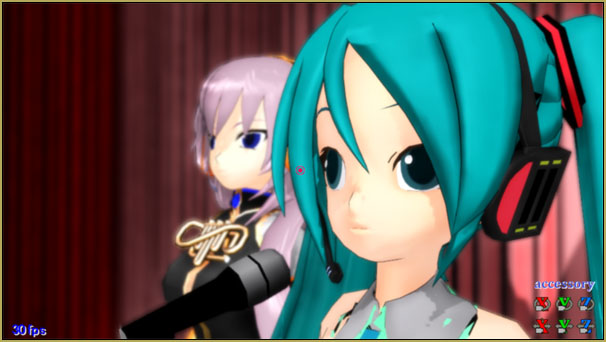 Then I went back to the BlackOut Effect… and, five frames before every camera-jump, I set the transparency where it was: transparent. … then I moved out five frames (right where the camera move was located) and closed the transparency to black… then moved out five more frames and went back to Transparent. … This gives kind of a “dark flash” where the camera scene jumps. … interesting effect… not sure if I like it… ? … maybe should be a total of six frames rather than ten… ?

Now… ALL DONE except for the Animation…

THIS is the video I posted to YouTube to see if the music gets blocked, or not…

There it is, so far… the Animation will be much more “alive” when I get the actual animation completed! … but a test like this only takes half-a-day and it shows me if “it’s working” or not… and it gives YouTube a chance to ban my music, if it’s going to, before I burn another week or two on the difficult part of the animation!

That’s IT, so far… next, I will do the actual animation!

Have fun with MikuMikudance!