After a fat Eight or Ten Hours…
I have my Arrow Lip-Sync finished!

Lip-Sync as a separate animation file… 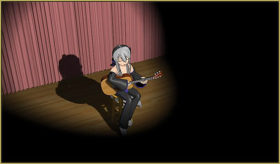 I started this project with a soundtrack, a stage set-up, and some camerawork. I added some effects… and NOW it’s time for the animation!

My Arrow lip-sync took me, like I said, at least eight hours of careful, not-quite tedious work… about 3000 frames of my 3900-frame animation. When I felt that it WAS getting tedious, that “I couldn’t TAKE IT anymore!”, I would “save” and quit, and try, again, tomorrow. … Then, at the start of that next session, I would review and enjoy and, maybe, fine-tune, my previous work as inspiration to get back into it, again… maybe do a Render to AVI to see how it is looking.   It doesn’t sound like it… but I enjoy doing the lip-sync. It’s really fun to see the model mouthing the words as I progress through the animation. 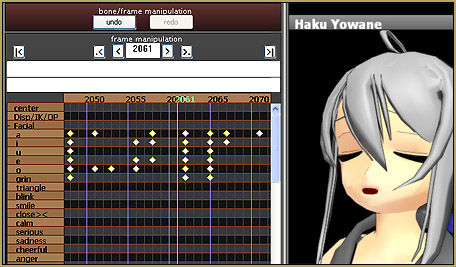 I like to do the lip-sync as a separate MMD animation… separate from the actual “dance” animation. I want to have the model’s face clearly in view with no distracting elements in the way of my concentration… and, yes, lip-sync work takes PLENTY of concentration!

Two, even three, sliders at a time!

I used to recommend doing lip-sync using only one or two sliders at a time… because it used to be all I could do to keep track of ’em… but this animation needed some subtle mouth-action and I felt limited by the few slider-options available to me; this Haku model is pretty simple! … so I did employ several sliders at once to get “just the shape” I was looking for.

DOWNLOAD my VMD and Mp3’s…
… with or without the applause!

Finally… I can start the animation!

Where can I find a Cry Baby Motion DL? I want to download MiyukiOhayashi's MMD ...read more