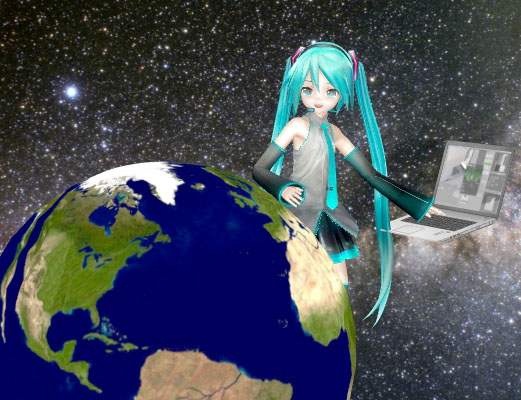 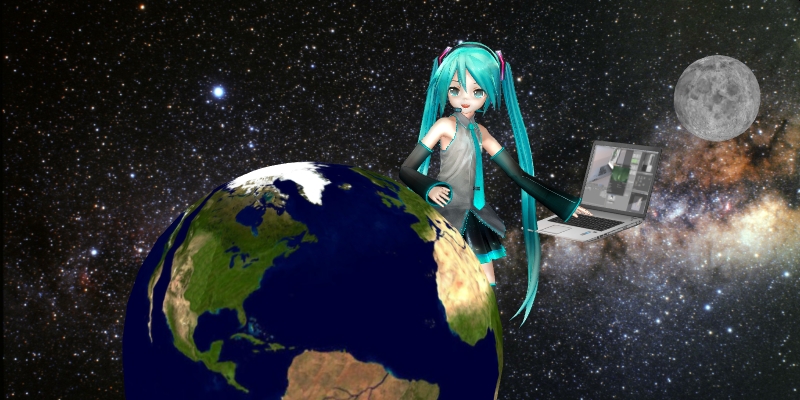 In Part One, we downloaded our planets and prepped the objects to be rotated… loaded our object into PMXE and centered-up the center-bone and added a Motherbone.
Here, in Part Two, we will animate MMD rotating objects 360-degrees.

The nature of MMD’s 3D space

Any point in space inside of MMD can be referenced by a coordinate system, In the picture below, the origin point which is 0x, 0y, 0z is the point immediately under the South Pole. MMD knows where everything is relative to this point. So for example, Miku and the Moon both have coordinate values relative to the origin point which tells MMD where to draw them. But how exactly does MMD know how to draw Miku? 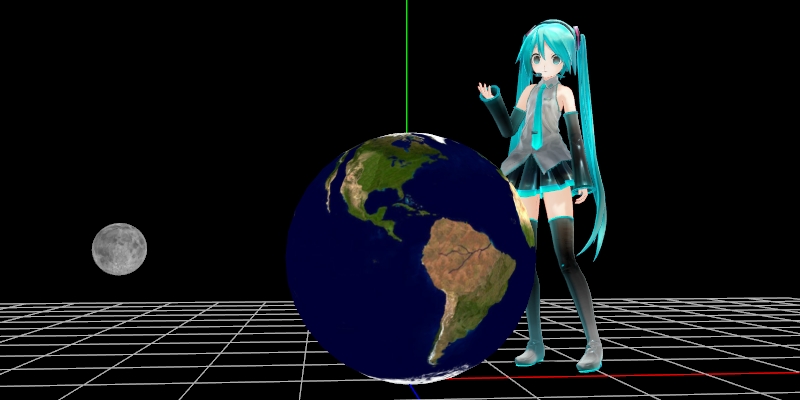 When MMD draws Miku, it looks at her PMX or PMD file and that gives it all the information it needs to draw Miku. In simplistic terms, MMD locates Miku in MMD’s 3D space based on the position of her Center bone and then builds her up using the rest of her bones which all have coordinate values which are relative to her center bone. Because of this system, when we move any of Miku’s bones, we use the “LOCAL” coordinate system.

Miku’s center bone is connected to a system of sequential bones chains. Each bone in the chain has an axis of rotation which is based off of it’s relationship to the other bones in the chain. This system, in a nutshell, makes it much easier (and faster) for MMD to draw Miku as all it needs to worry about is how changes in one bone affects subsequent bones in the chain.

This is an important concept to understand: each individual model loaded into MMD must have a center bone and is controlled by its own unique local coordinate system.

The GLOBAL coordinate system is absolute. If we want Miku to walk, we can make a walk animation, and she will execute it but will move no where in 3D space unless her center bone is moved.

If a model has a “mother bone” also known as a “master bone” or  “root bone”, that bone can be used to customize the world coordinate system for the model to which that bone belongs. This is why normally, you do not use this bone for any other purpose.

A lot of beginners to MMD do not understand the full significance and differences between the LOCAL and the GLOBAL coordinate systems. What they are used for, when to use them and how they are interlinked. This is why a lot of new users have difficulty rotating models in MMD.

But in a nutshell:

Describing direction of rotation in MMD

Anything in MMD can be rotated in the following directions:

A Problem and a Solution

If you attempt to animate a 360 degrees rotation in MMD, nothing happens. This is because MMD interprets 0.0 degrees > 360 degrees as going from 0.0 degrees > 0.0 degrees. So the way to rotate an object 360 degrees is to do it segments. Watch the video below as it shows you how it is done:

Although the video only shows a clockwise rotation along the Y-axis, the same method applies on any axis and in any direction of rotation. The only trick is to get your mind around it all and once you “get it“, it is actually stupidly simple to do. But in a nutshell here are “the rules“:

We used LOCAL mode in the video. This is fine because we were only rotating on a single axis.

But as a beginner make it a habit to use GLOBAL mode for rotations and save yourself a lot of grief.

Rotating on more than one axis

You can also rotate along multiple axis at the same time as the next video will show:

There is a trick to this and as long as you follow this method, you should not run into problems:

If you really need to rotate along a third axis, just repeat steps 3 and 4.

USE GLOBAL MODE as it makes doing things far less confusing both for yourself and MMD.

ROTATING THE EARTH AND MOON MODEL

In any case, we will make things very simple for our project animation:

The method used to rotate both models is exactly the same one used to rotate the laptop in our first video: 4 x 90 degree segments for one complete rotation. Once all the rotations are programmed, we will use the mother bone at frame 0 to tilt the entire model 23.5 degrees to simulate the Earth’s tilt. It is just this simple to do and the entire process can be seen in the video below.

The moon also has a tilt too, but since the model isn’t accurate but simply representative, we will ignore this. If you want to do this the model does allow the moon to be tilted. But, honestly no one will notice the difference.

We encourage you to try and recreate this animation using the instructions above as being able to do this for yourself will be very instructive. But if you just want to see the motion in action, the motion file is included in the Earth and Moon model download file. 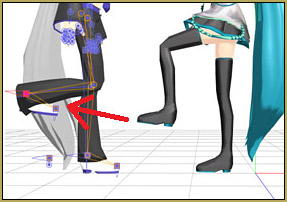 Use The Background AVI to Make Realistic Animations in MMD ARIZONA 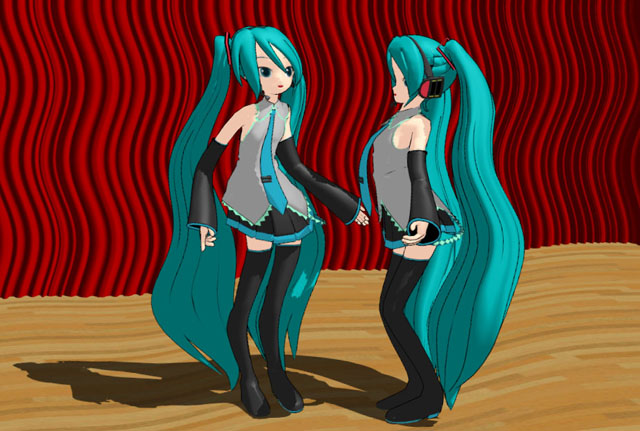 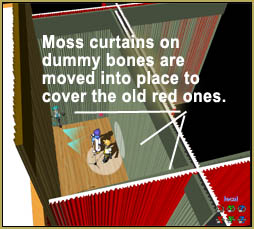 Learn How to Dress the LearnMMD Stage – Instructions Dummy Bones 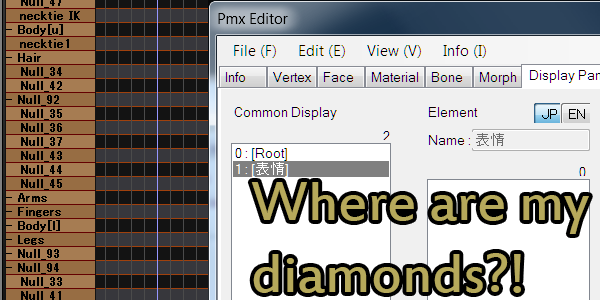 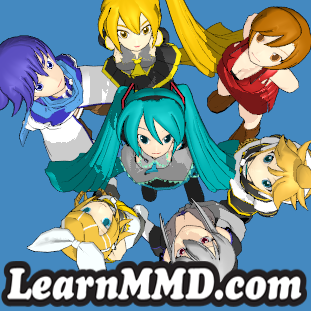