What is the 966_ Otogibanashi Toon shader? How can I recolor my models without using PMXE? How can I add an iridescent effect to my MMD models? What the heck does Otogibanashi mean, anyway? 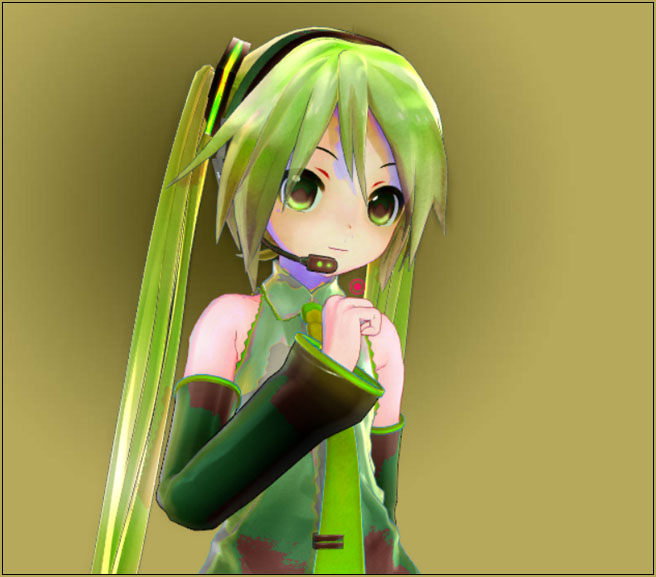 I discovered Chestnutscoop’s List of ALL MME EFFECTS on Deviant Art. She is working to list and link-to ALL MME effects… a HUGE, monumental task! … The first one on her list is the 966(Kuromu) Collection of effects.

I visited that BowlRoll page she mentions and found a collection of effects. I chose THIS one from that collection. 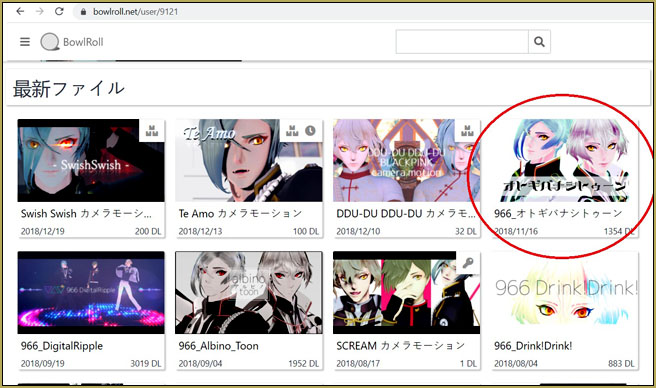 What the heck does Otogibanashi mean? Well, you know how much the Japanese like compound words… and so if you break this down, it translates as Fairy Tale. … and remember to pronounce the word as in Romaji: latin vowels… and in Japanese, no particular sylable empahsis… and each sylable ends with a vowel… except n…
… so: O to gi ba na shi 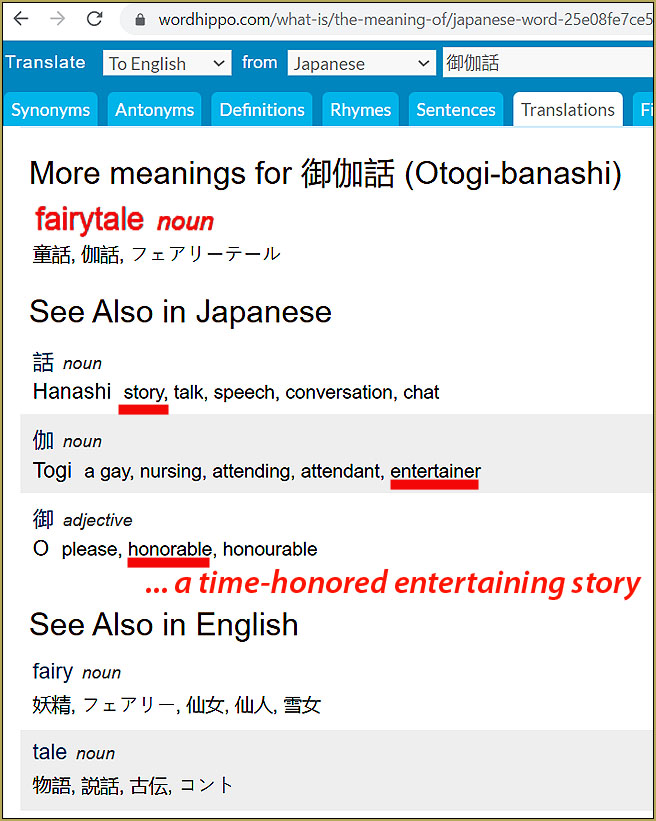 So… I’m glad we have THAT cleared-up, right?

The Fairy Tale effect adds colored filters to your models…

The 966_ Otogibanashi Toon effect gives us EIGHT color-filters that you can add to your model or stage… one at a time. The original Japanese file names do not translate well, so I took a stab at renaming those FX files, myself. 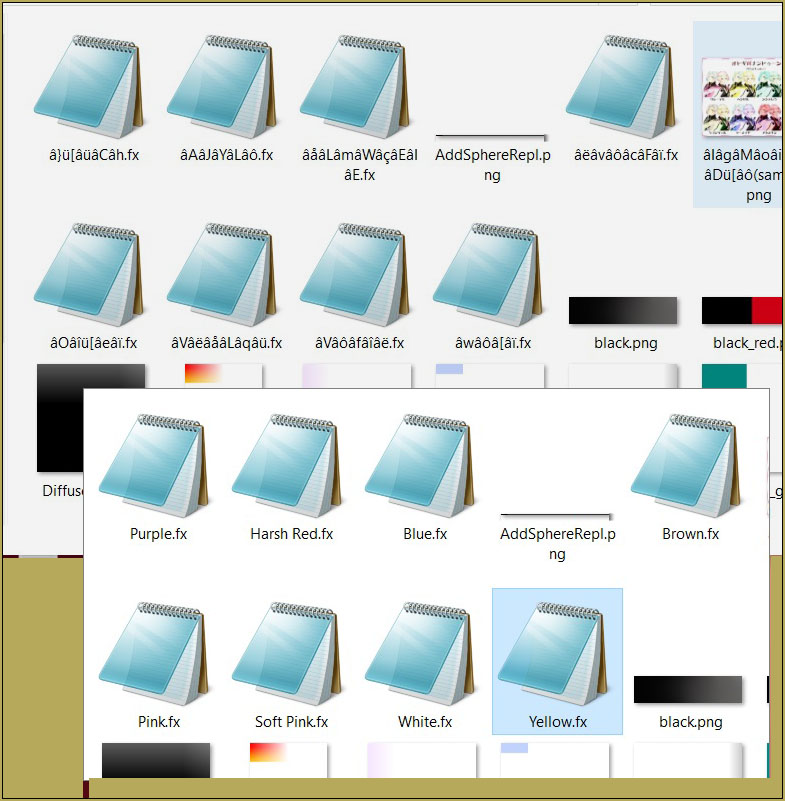 The effect is much more complicated than the simple names I gave them, but… I had to call ’em something!

I found the Brown version to be the most pleasing as I shifted the colors of Appearance Miku. 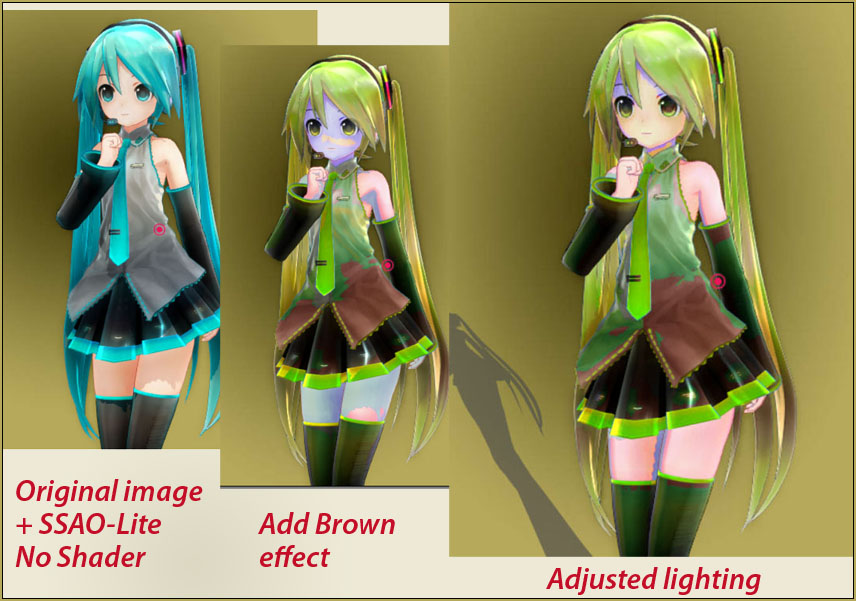 The position of the lights is EVERYTHING as you use these shaders.

The color-wash applied to your model has a rather “iridescent” quality that shifts as your lighting is adjusted. You will find that the lighting is very important to achieving the result you want.

I am thinking that, because the light is critical, we will not be able to use 966_ Otogibanashi Toon except for still-image composition. In a video, the model will shimmer (as if in a fairy tale)… with difficult to control results. 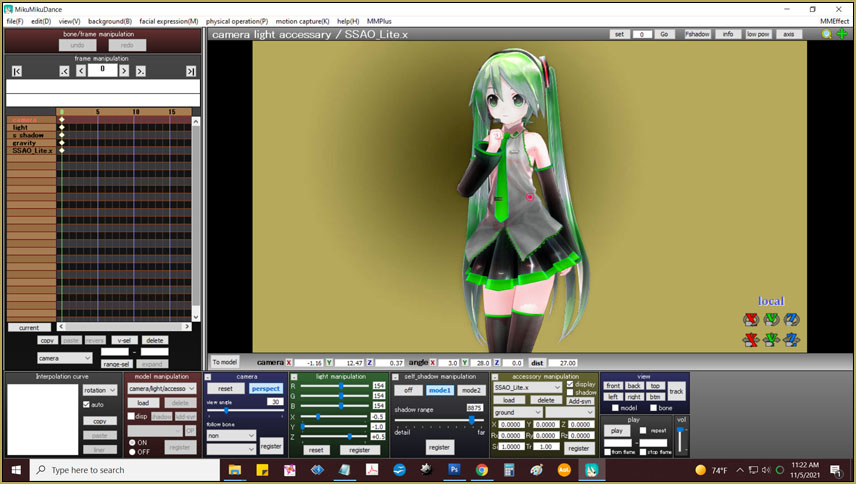 The White version of the effect is interesting… it sort of lightens the whole model… and you can get some of the color back by adding SSAO. With WHITE, the shadows are all softened and then the SSAO brings back the skin colors. 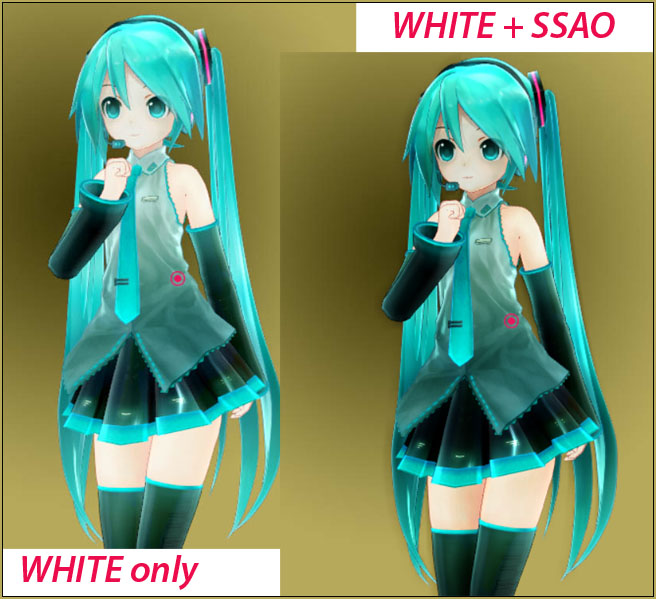 Again… the names I chose are only approximations of each effects true… effect.

I took a look into modifying this effect so as to adjust depth of the color “filter” and, maybe determining an exact color shade that I wanted to see… but those FX files have only a few variables buried in them and I could not readily determine any “user” adjustments. … BUT: There are a ton of .PNG texture files in that folder, so… you could drastically alter this effect by adjusting those texture images. … Remember: Keep the Faith-MMD … you can use the effect, modify it for your own use… but do not share your files with anyone, the creator has sepecified “no redistribution”.

The README is quite simple and says “no redistribution”… so I cannot share my translated version with you. Using Notepad++ and Google Translate you will be able to decipher the text of the Japanese .txt files included in your download.

That’s it! … Have fun with MikuMikuDance!

I enjoy this “fairytale” effect… such nice colors.