Why do imported objects turn white?  Why don’t imported accessories move right?  How can I fix imported textures and bones in PMXE? 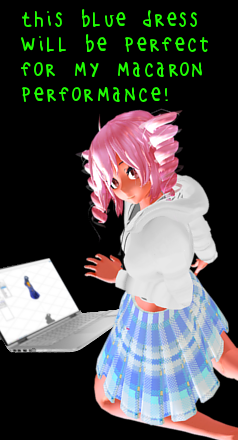 Hi!  Reggie forwarded me a few questions from readers having to do with some problems that people often have when starting to learn PMXE.  One reader writes,

When I load the finished model into Miku Miku Dance it changes the base of the model to white.

I add a necklace to my model but when I went to MMD it didn’t move with the body.

If this is happening, don’t worry!  It happens to everybody, and it’s easy to fix.  It just requires learning a little bit about PMXE.

What happened to the textures? 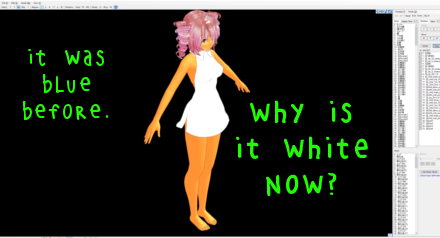 When Teto imported the dress into her model file, not everything came with it.  That’s because parts of the dress are textures.  PMXE needs to know where to find these files.  When you import one model into another one, PMXE no longer knows where to look.  You have to copy the textures from the old model’s folder into the new model’s folder. 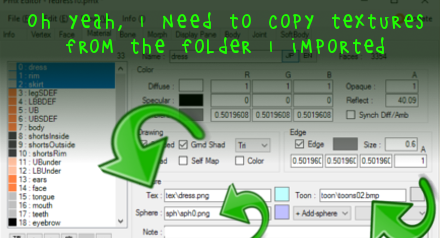 If you’re not sure what to copy, you can probably get away with copying everything.  But you can look at the PMXE materials tab to figure out exactly what textures you need to copy.  In this case, PMXE says that it expects the dress texture to be named dress.png, and it expects it to be in a folder named tex.  So once I copy that tex folder to the same folder that the model is in, I’ll be good! 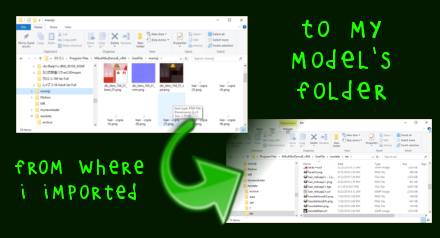 If it’s open, PMXE isn’t going to realize that you copied textures.  It doesn’t look unless you tell it to.  You can tell it to check for textures again with Edit->Update or ctrl-U from the 3D window.  Or, you could close PMXE and open it again.

Why aren’t my accessories moving right? 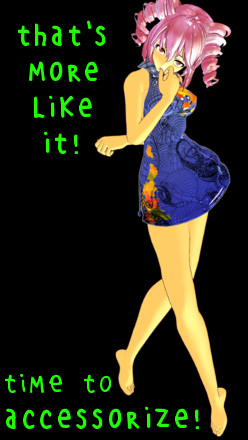 When you import a new model into your model, it needs to know how to move.  Sometimes, the imported object is just weighted to a center (センター) bone, instead of weighted to the parts of the body that you want it to use.  Sometimes, your model has more bones than the accessory modeller knew about: the modeller may have weighted it to an Upper Body (上半身) bone, but you have an Upper Body 2 (上半身2)bone that would be a better bone for that accessory to follow.  When that happens, the imported accessory isn’t going to move right on your body. 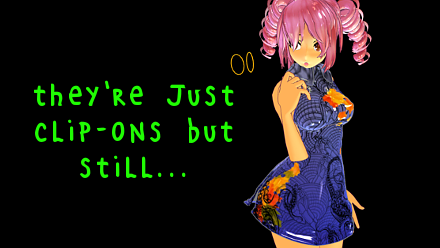 But it’s not hard to fix this.  Before you import one model into another, take a look at the bone tab.  This will give you an idea of how the model is laid out.  One good technique is to rename the bones in models that you import.  Then, when you import this model, the bones will be added rather than merged.  (And, you can use the imported model’s bones to more easily adjust its position and orientation.) 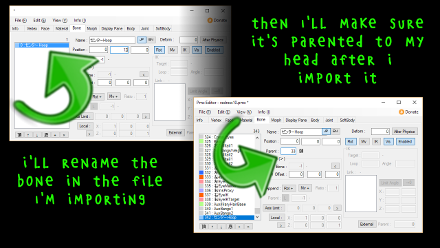 Then, after you import the model, you have to make sure that the imported model’s bones are following the right bones for your model.  Here, Teto’s ears follow her head (頭) bone.  So we’re going to assign the head bone as the parent of our imported earring’s center bone.

Now, with a new haircut to show off her earrings and the high collar of her new dress, Teto’s ready to perform!  And your model is too!

Keep the Faith and credit your sources!  I used my own Tda Tutor Teto for this tutorial, in a dress based on meshes by Kanahiko-chan!

How can I add fire light and shadows to my MMD scene? Where can I ...read more

How can I give my MMD model larger "Oppai"? Where can I download the Oppai ...read more

Best Way to Run MMD on a Mac