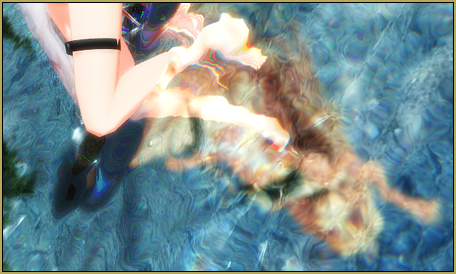 Getting the most out of
BeamMan’s Water Effects

BeamMan’s Water Effect MMEs are pretty nifty, but they are not just for creating bodies of water. You can actually do a whole lot more with them than is immediately apparent!
NOTE: Just tap on the photos to see them full size. This goes for the videos too. They look best full screen.

Before anything else, you need to be aware of the following as certain things are necessary before the effect even works on your system, if at all.

LET’S START WITH A PUDDLE

Any little kid will tell you that puddles are fun! Guess what? So is the puddle included with the water effects. In some ways, it might actually be the most useful of the variants. The reason for this is that BeamMan’s water effects (except for the ones labelled “static”) are dynamic.

What this means is that if a MMD model puts his/her foot into it, it will cause a ripple. I stipulate “ripple” as opposed to a “splash” as the latter is not supported as water splashes are far more complicated. Also, MMD water isn’t exactly “wet“…

Still ripples are darn useful as are the basic controls that allows the water effects to be blended into almost any scene. But there are some “rules” as nothing works like magic, so we’re going to use an actual set up to show you how it’s done.

Let’s grab a model. I’m going with Miku in her bikini as, well Meiko doesn’t want her clothes to get wet…

Then we load the puddle and size it to 5.0. Each effect has a recommended size, please refer to Reggie’s tutorial if you need more information on this. 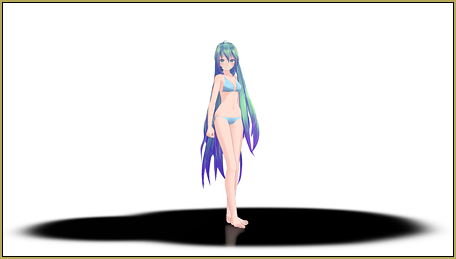 First and foremost; turn off the shadow display. The default MMD shadows do not look good with the water effects. You can use an external shadow effect if you wish like we’re doing in this tutorial. We will be using Excellent Shadow and d_Pmotskin on Miku.

The water effects have a mirror like quality. They get their color by reflecting other models around them. This is important! You can already see this in the image above where Miku is reflected in the puddle. To give the puddle some color, you start by loading a sky-dome. 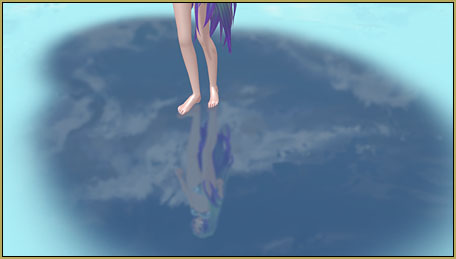 Next we add an actual stage, since Miku is in the mood to go to the beach, let’s just use the old Gull Town model. We’re going to attach a dummy bone to the town model and just locate it to where we want it. 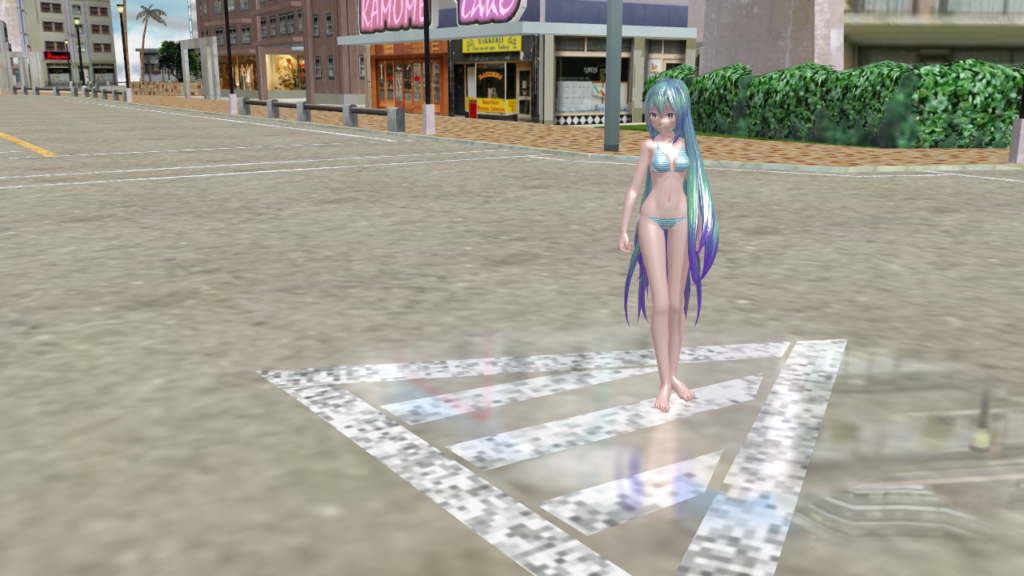 So far so good, but we can tweak it more. But before doing that, make sure that the model draw order is sorted out correctly or it won’t look like what we are showing above. Specifically, this is the usual draw order for a set up like this:

Next load the controller that comes with the effect. I’m using the English translated version and that really helps to know what you’re doing. The control is called WaterLightController_5.pmx.

The controller has several functions. Only the ones in the top rows will be useful most of the time. The one’s on the bottom row just tweaks the color of the water and are only useful under special lighting conditions.

The top row controls are as follows (and I’m using Reggie’s translations of the label names so yours might be different):

With the puddle version of the effect, the latter two controls won’t have much influence, but the first two do and we’ve used ours to make our water actually look “wet” 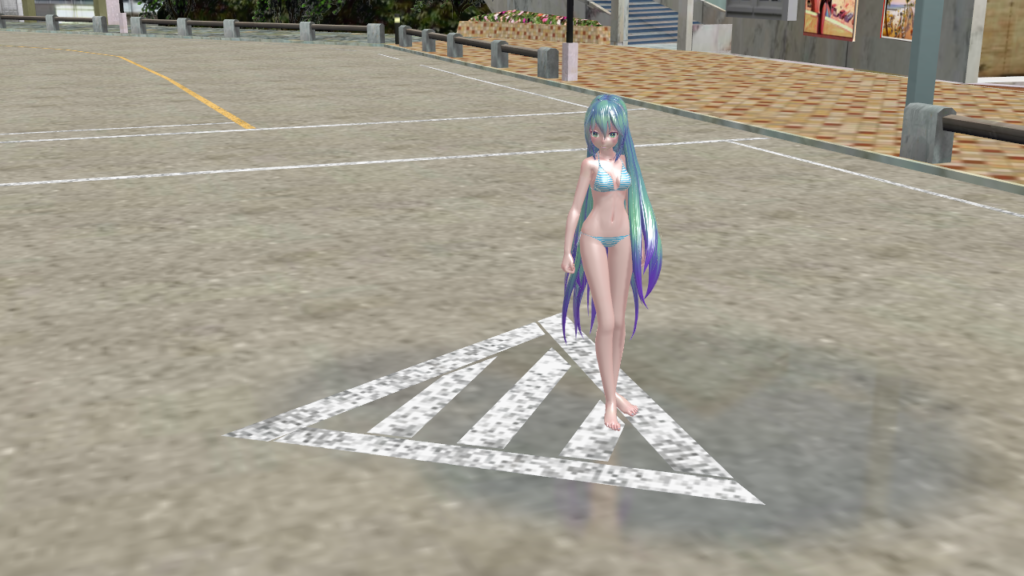 There is a proper way to use the controller that you need to be aware of; the controller has a single bone which is used to tweak the base color of the water. The color value is controlled by the x,y,z coordinate value of this bone. It works on a scale of 0-255 and basically is an RGB system.

You can set these values manually by inputting the numbers directly, but it is a lot easier to just move the bone around till you get the desired color. Once that is done, deselect this bone before messing with the morph sliders.

OK, after all this trouble you got a big wet patch on the street. HO HUM, you say? Well, there’s a lot more to what we just did, just watch the video below especially what is happening around Miku’s feet:

The water effects only support ripples and not splashes as mentioned above, but this is still extremely useful. Basically, how it works is that any mesh that collides with the water surface will trigger the rippling effect. What this also means is that a MMD model boat will cause ripples so long as it is moving. Also, the same applies to a model wading in water. This latter, can make for some really interesting video possibilities.

Can you capture the rippling effect in a still image?

The answer to this question is: NOT DIRECTLY.

The method is to make a short video clip of the scene. The model must have moved at some point in that clip. Then extract the image using a video editor.

With that out of the way, let’s go swimming, well kinda – no splashing, so swimming doesn’t actually work. But wading does…

WADING THROUGH THE SHALLOWS 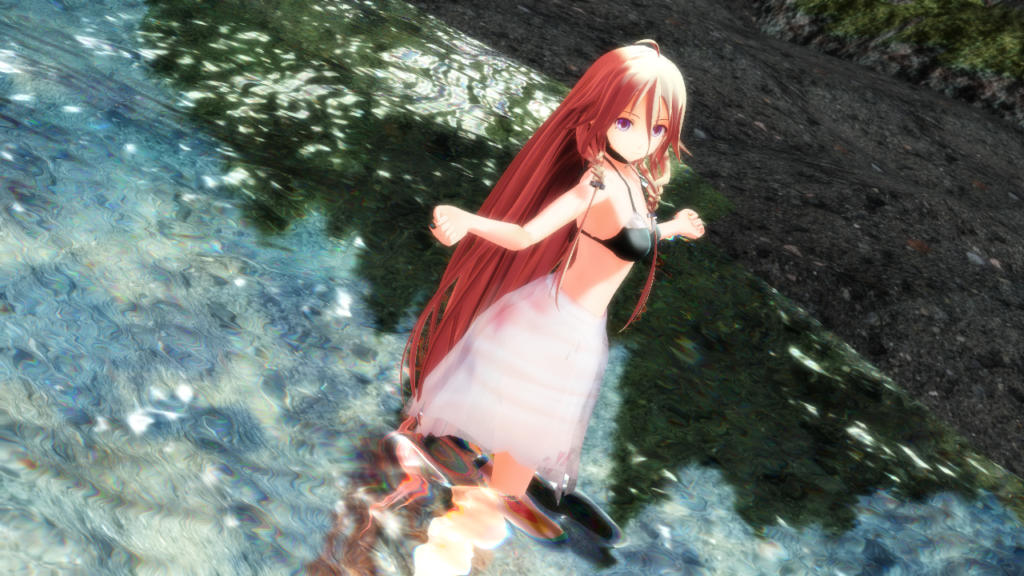 We are going to show you how to set up a scene like this (and amaze your friends). It’s actually ridiculously easy to do, but you do need to plan ahead.

First of all we loaded a sky-dome. Then we loaded the water effect model and a scenery model and attached both to the same dummy bone. Then we loaded the IA model. The dummy bone was then used to move both the scenery and the water so that IA’s feet are located on the bed of the stream. Then, in this case, we loaded a motion to IA. BTW, we’re using the calm water version of the effect. This was sized to 200% larger than it’s load size as recommended in the documentation.

NOTE: This mountain stream stage by Yamada actually comes with a version of the water effect, but that version is now considered obsolete and probably won’t even work. Just use BeamMan’s updated version. The link to this stage is on Nico Nico somewhere… 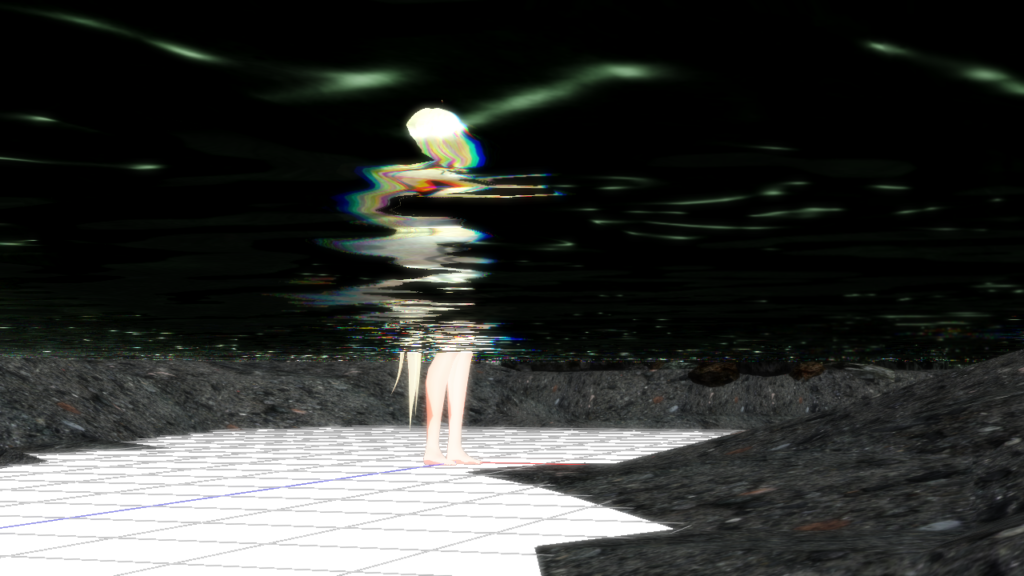 Next, using exactly the same method as with the puddle above, using the controller we configured the behavior and the coloring of the water. Unlike with the puddle, we actually did use the bottom sliders to tweak the green values a little for a more natural look. 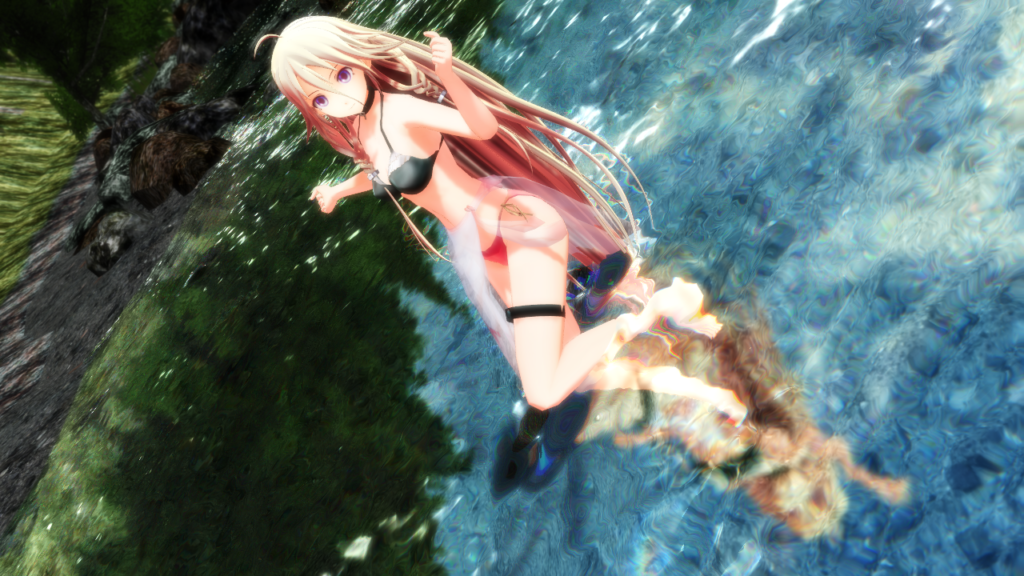 With our mountain stream water, it is relatively clear. It reflects a little of the blues and greens from its surroundings to give it a fresh, clean look. You can see IA both reflected on the water surface as well as those parts of her under the water.

Once again the model draw order is crucial for the right look. Read this article if you have no idea how draw order works in MMD.

As with the puddle, you will only really experience the full power and beauty of this effect when the model is in motion. So, here’s IA in this scene, moving:

GET THEM INTO THE WATER!!

BeamMan’s water effects are truly amazing, and not just to look at; so get your models onto or into the water. It really is worth the effort. BTW, the rippling effect will work pretty good with a shark model… just saying… or Godzilla for that matter…

THINGS TO BE AWARE OF…