I will answer those questions in this rant 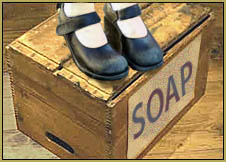 later, but first things first… Reggie, I need your soapbox for the rant thingy now-

As you know, many MMD modelers created their own models, right ? Examples like LAT, Piron, Zeze, Aoringo, Kanaha, etc.  And you know what? They distributed their models for free, right? You’re allowed to use their models as long you credit their creators.

I see many people take the credit for models they didn’t make. They are like: ” This is my model, it took me 7 months to make, you know!” It’s a total lie unless it’s the creator himself who said that.

Me : ” Excuse me, is this your model? ” I asked her because her model looked the same as Aoringo’s. ( She posted a pic of Hetalia’s America on dA and claimed him as her model.)

Me : “Umm, but I think this is Aoringo- san’s model” *Gives the link to the model*

She : “She / He is just reuploading my model to Bowlroll!”

Some people who saw this comment chain, say that the America model IS Aoringo’s. Finally, she confessed and said that Aoringo had made the model, not she.
Yay for me !  \ :) /

So… First: please KEEP CREDITING THOSE CREATORS ! IT’S A MUST !

Second: Don’t recolor models ! It’ s a BIG NO ! Unless you want Eli’s mafia to chase after you :D

Why shouldn’t we recolor models ?

You see, the modelers really put in some hard work! They need 5 or 6 months for one model! Please respect them, guys..

Third: DO NOT BE MAD AT JAPANESE/WESTERN MODELERS WHEN THEY DON’T GIVE YOU THEIR MODELS.

Unless you requested a model from him or her and he/she said “yes” and then took such a long time to finish it… like she promises you the model will be done in 2 months but she is so lazy she didn’t give you the model. Then you can be mad… never break promises, guys :o

But, for Japanese modelers it’s common for them to not give their models to people that are not from their community. They’re afraid the western MMDer will break her model rules, so they only trust people in their community.

Follow the rules of the modelers ! IT’S A MUST !

Like if the modeler said no redistributing the edited model then DON’T DO IT !

Unless you want the model to be deleted from Bowlroll, Deviantart, etc >:D

Well, that’s all guys, if you have any questions about my model rant or about the model rules just ask me :) or if you’ve had a lot of trouble translating the model rules to English, ask me. I’m a beginner at Japanese but I’ll try my best to help you :)

If you can’t open PMD Editor on your computer or laptop or notebook or anything similar to those gadgets, just ask our teammates for help! Me, Reggie, Arizona, KillerBeer , and our other teammates will help you! We don’t bite :o

Thank you for the use of the soapbox, Reggie!

<Nicole steps down from the soapbox amid loud cheering from the assembled crowd of MMDers. Thank you, Nicole!>

hello i like this post and agree with it. just have a question , if the creator said recoloring is okay , is it okay?

Yes… if the ReadMe notes allow you to recolor… then, yes. and when you use the model, leave a credit line in your description… Keep the Faith-MMD!

Game ripped models have rules– just about every game you can ever buy comes with an end user license agreement (EULA) which details what you can and can’t do with the resources very clearly. Mostly, they say that you can’t rip models.

Most people ripping game models are ignoring the rules associated with those models, which makes it seem odd that they then make rules on their rips– do they expect people to show more respect for their rules than they have shown for the rules of others?

But from the perspective of somebody using these models, if the person converting them has ignored rules restricting use, then it’s no excuse to ignore the ripper’s rules, because the rules of the original modeller (game designer) are still in effect. Even if you have no respect for the ripper’s rules, you should have respect for the original modeller’s rules.

I see, I think I understand.
So than would it just be best to follow the original modeler’s/Game designer’s/game company’s rules over the ripper and/or converter?

I have a couple of questions. If a model maker doesn’t make models anymore, does that mean the model makers rules are void?

So… what’s your point? … both instances you cite, you already know the answer. A model maker’s model… is his model. He lets you use it as long as you adhere to his provisions. It doesn’t matter if he no longer distributes that model… if he stipulated the use for that model, he has stipulated the use for that model! In the second case, you say that model already breaks or has broken the rules of proper conduct… and, what? … do you want to feel free to use it, anyway?

Listen to your heart… listen to your gut… sure, you WANT to pretend you can break the Faith… but in your heart, you already know the answer… or you wouldn’t be asking… you KNOW that to Keep the Faith, you must follow the README for that no-longer-available model and “No” you should not use that ripped model.

No. that’s bullshit. If the modeler made the model himself, it’s his. The company may specifically say that the contents belong to them instead of him (for example, Bethesda releases Construction Kits for their The Elder Scrolls and Fallout series of games, so anyone is free to make mods with them, but officially each and every such mod belongs to Bethesda), or they may claim the modeler had no right to create the model in the first place and send a cease and desist to him (though I don’t imagine many would do such a thing unless the model was ripped… well, wouldn’t vouch for Disney in that regard), but in any case, it’s between them and the modeler. Nobody else has a say in the matter.

Yes well, I ran into such a person several days ago who gave me the exact same response, as well as the rules being void because the modeler doesn’t make models anymore.

I was checking to make sure.

Hey! I have a question.

If you have a model that is not downloadable anymore, you can still use the model, right?

Like everything else in “Keep-the-faith” area, it’s a matter of conscience, conjecturing, and commonsense. If you know for a fact that the author pulled down the model because he wished it not to be used (be it by certain category of MMDers or whatsoever) , it would be polite to comply to his wishes. If not… well, it’s not that somebody can *force* your decision, isn’t it?